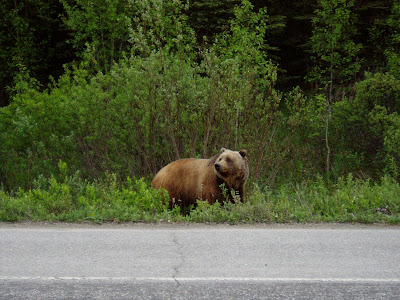 G-Bear
We once had a mountain biker named Richie Schley come and stay with us a couple of summers back. Nice guy, lived in Whistler was a pro mountain biker and ex-pro skiier. Waaaaaay cooler than me, but made me feel cooler than I am. Richie introduced us to some slang that he used to describe bears. In his corner of the world, there were B-Bears. Black Bears. Lots of them. He saw enough of them around that he had lost his fear of them. But he had never seen a G-Bear. A Grizzly Bear. He was scared of the G-Bear, but not the B-Bear. Curious. Anyhow, the lingo stuck and Keith and I now refer to our resident wildlife as B-Bears and G-bears. It makes them sound so cute and cuddly. For example: "Awwwwwww.....who's a cute little G-Bear?!??"
So today at work we found out that the first bear out of hibernation had been spotted, a massive healthy G-Bear. There was even a photo of him in the snow looking all gorgeous. I love living in a place where you get to see B-Bears and G-Bears. They really are awesome, as-in, awe inspiring. So, welcome back G-Bears and B-Bears...may you continue to thrive and be wild and magnificent!! 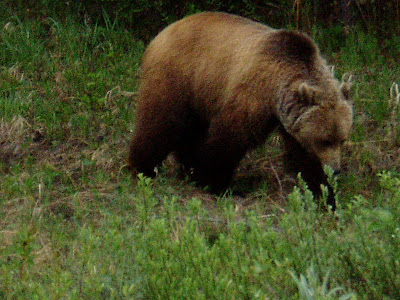 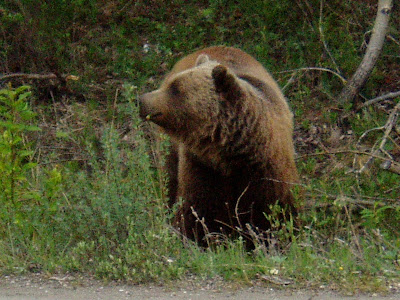 Oh my, that's a big bear. I just have mountain lions down here. In my little part of the woods we don't have bear, but there have been rumors that they, the B-bears are coming back.

Yep-that a G-Bear. She was eating some good stuff on the side of the highway. She's fat and healthy!

How do you protect yourself against bears while out on long, lonely trail runs? We have some down here, but I have never seen one. They are few and far between.

Really? Without giving a lecture, there are always a few things I consistantly do every time I go for a run around here. I do the same thing if I am 10 minutes from the house in the bush or 3 hours into the backcountry.

I make noise on the trail.
I carry bear spray in case I do have a close encounter.
I try and run in a group.

Given that running with friends is not always possible, I will do the first two things and STILL go out. *Check out my post on risk.* I just try and relax enough to enjoy my run, make a LOT of noise and keep on truckin'

OH - and my mom always told me to tell people where I am going and when I will be back!!

Thanks for the question Dave!