It's been an incredibly mild winter here in Banff, the temperatures have been down right decadent.  Usually, there's going to be a bit of "uncomfortable" weather during January or February but not so this year.  Except for a handful of really cold days it been downright balmy.  The snow has continued to fall, but the temperatures have remained mild and enjoyable.  It's been pretty dreamy by our winter standards.  Of course, we know that the shit could hit the fan at any moment.  The months of March and April are still winter months - we get a ton of snowfall at this time of year.

By Saturday, the trails around town were all in incredible shape.  Perfect packed snow, no ice and very runnable.  Throw in the mild temperatures and whoop-whoop!  Life is good.  I've been recruiting running buddies this winter, scheduling runs with friends is awesome - it means you've got some good company on the trail and it means you're committed to getting out. 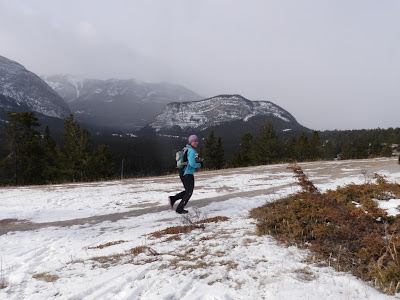 Anna, with Sleeping Buffalo in the background 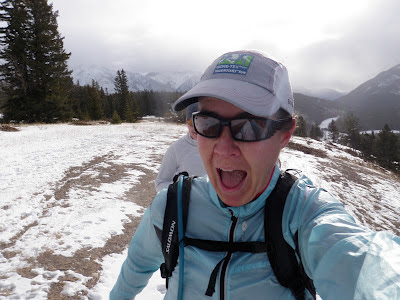 My Big Head - on the Hoodoos Trail 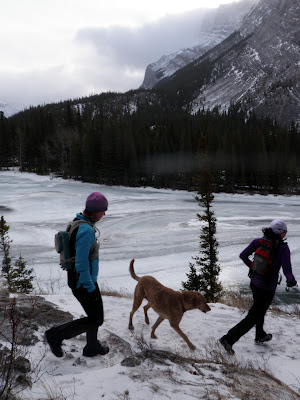 My friends are awesome.  My first summer running in Banff, I made my husband a very nervous man by frolicking on the trails by myself.  While it was all fun and I enjoyed those runs, having company on your long runs is a good thing.  On Sunday, I had 5 crazy-fit-fun ladies who wanted to do hill repeats on a mountain with 1000 metres of gain.  How awesome is that?  Really, to find friends like this who are up for anything - that's pretty hard to beat.  I love these gals. 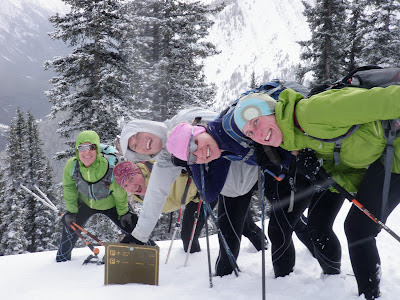 Suzy, Klaire, Nicki, Monica and Jen
The original plan was to go up Sulphur Mountain a couple of times and practice our "power-hike", but damn - it was snowy out there!  We had a major wind storm the night before and some fresh snow throughout the night and BOOM - our trail was buried with a foot and a half of snow.
So, after a snowy ascent up Sulphur, we modified the plan and headed over to Tunnel Mountain for a shorter, but faster run up Tunnel Mountain Mountain.  Here's the ladies on Tunnel Mountain: 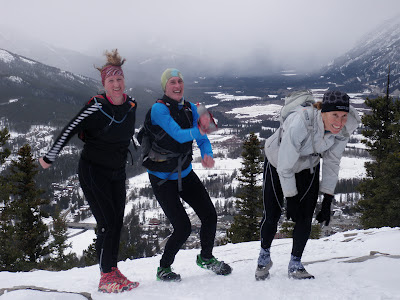 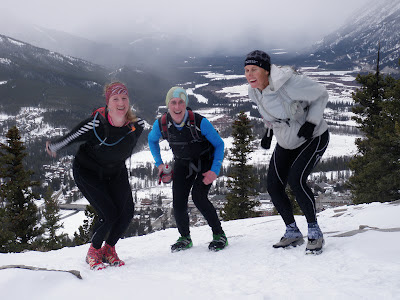 Ridiculous Jump Photo #2
You get both of these photos, because I couldn't decide and they are equally terrible/funny/dorky.  After Tunnel, we headed back to Chateau Leslie for a hot tub and Jen decided her legs needed a little cold therapy.  It was a fun day on my backyard trails with the ladies.  We're all training for something these days and Nicki is leading the charge as always.  Nicki and Jen are heading for Miwok, Jen is doing Sinister Seven in June and Nicki has signed up for the 3rd year in a row for my favorite Italian race the  Tor des Geants  She's recruited her family and Klaire to join her in this years adventure and the training and fun has already begun! 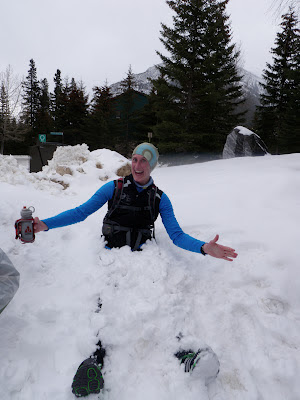 Jen cools her jets.  And her legs.
The next day, winter reared its head in a dramatic fashion.  It started to snow in late afternoon and through the evening and by the time I went to bed, it had dropped about 40cm of snow.  I enjoyed this storm with a late night naked hot tub in my backyard.  The big fluffy flakes were coming down hard and even with the steam and warmth from the water, I had a couple inches on the top of my head. 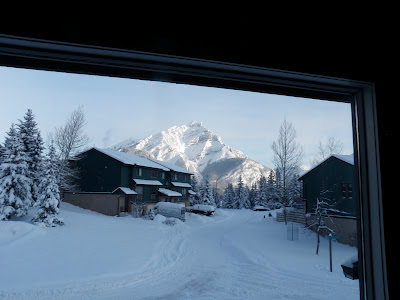 Out the front window
When I awoke in the morning, there was snow everywhere and it was deep and beautiful and awesome. I think it was the most snow I have ever seen here in Banff.  That little short storm dropped about 50cm!! 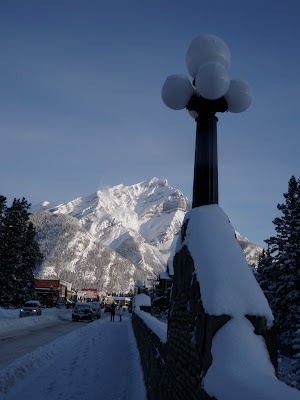 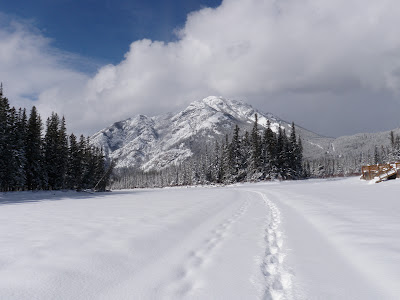 Lunch time walk on the river 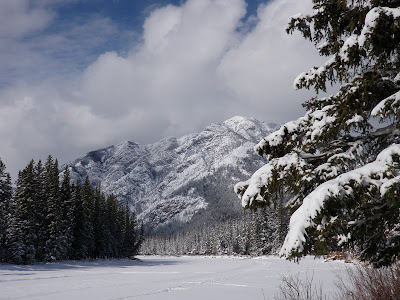 Snow, snow, SNOW!!
It was the first time I've had "powder envy" in a long time.  I had the urge to call is sick and I definitely felt like I was missing out on an awesome resort day on the slopes.  No need to go ski touring, when you can  use a lift and access the goodies on days like this!!

Alas, it was short lived.  Last night, a Chinook wind rolled through and the 50cm of fluff turned into 20 cm of sludge and ice.  Today's run is going to be a bit of an "Adventure Run"!  Thankfully, I've got some friends to get out with who appreciate a good day of adventuring. :)