Here are some photos from my 4 1/2 hour run upon my arrival in Grand Cache. For some reason, I was compelled to take photos of some of the different things that I saw while running! 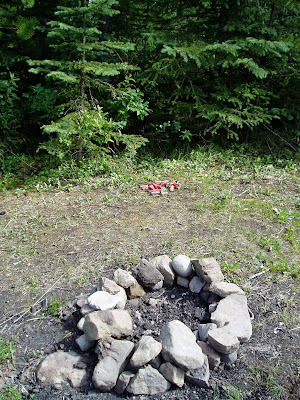 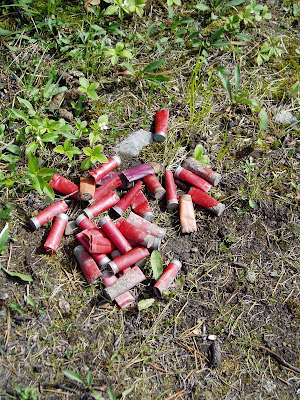 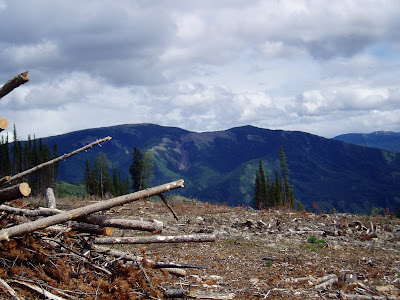 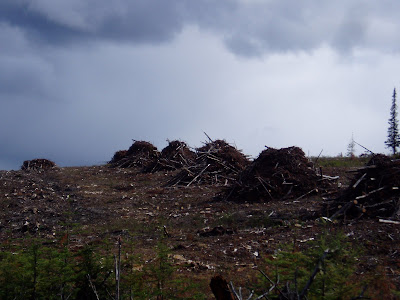 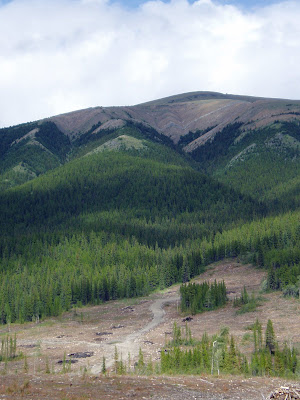 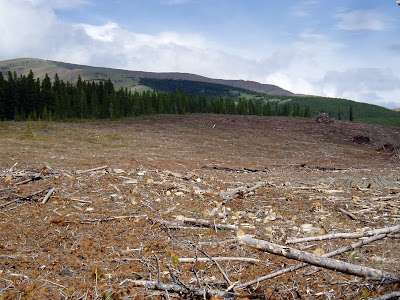 But let's get to the goods: RACEDAY!!

I love races and if I'm not racing, I still want to be a part of it. So I decided to play cheerleader as much as I could. At the startline, I got a photo of an excited Steve and Brenda ready to conquer 125km of trail goodness. My Banff friends are amazing! I had little doubt that they would both reach the finish line and offered a little support along the way. Eric and Michelle were there too, with another friend Terry from Washington. I was also cheering for my friends Neil Runions and the speedy newbie, Norma Bastidas. 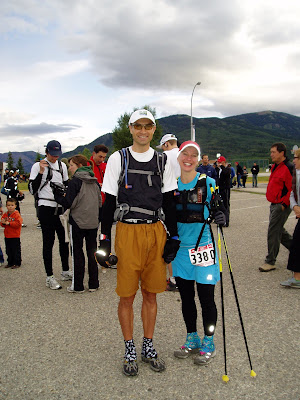 Fueled by coffee, I charged around like the fool that I am and cheered on runners in 3 different places and that was just for Leg 1!! After that start to my day and while all the runners were out and about for many hours in the bush on Leg 2, I got myself a big greasy breakfast and then caught a quick power nap before heading back to transition. I got lots of quality time with Michelle as she was playing crew for both Eric and Terry. She reminded me of the old Ultra adage of what CREW really stands for.....Cranky Runner Endless Waiting. She was excited and nervous for Eric and really was anticipating and quietly anxious for her honey to finish each stage. I think I would be the same if my sweetie was out doing something so tough!! 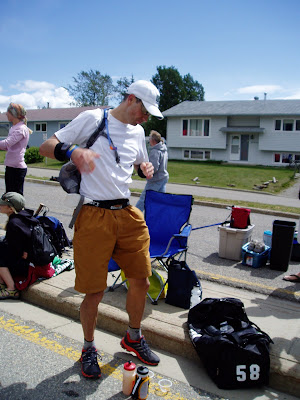 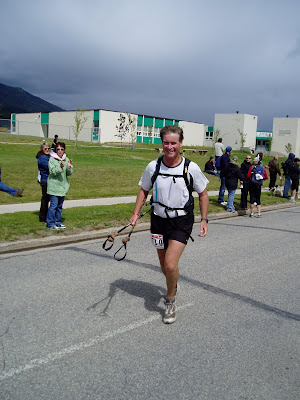 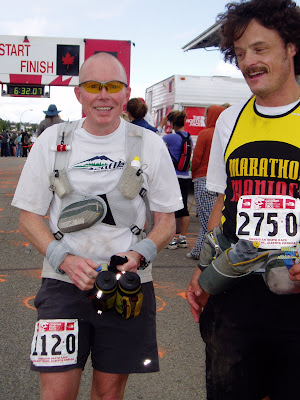 Eric and Terry, the man with the hair. 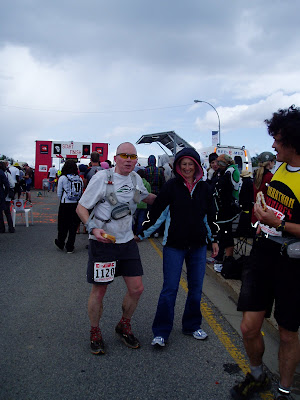 Eric and Michelle with Terry on the sidelines

Steve came through, right on schedule. Neil came through looking relaxed and Norma came through with a big bright smile, feeling good. Brenda came through in a little discomfort from the brutal downhill, but looking great! The weather was frickin' cold all day. I spent the entire day in my puffy down coat. I also learned something: I can't cheerlead and take photos. I took so many crappy photos of runners backsides running by in a blur! I'm a lousy multi-tasker.

Because I was waiting at Transition 2 for a while, I missed Steve go through Transition 3. While I was in the car driving like a crazed woman, I saw him running the short highway section. It was about 2c and it was raining sideways. Poor guy. Poor runners!! He was hot on the tail of the first place female runner and running strong. Back at transition 3, I got to spend more quality time with Michelle, under my umbrella this time, waiting, waiting and waiting. But I loved it! Neil came through ahead of schedule and his crew was nowhere to be seen, I went running to find them for him. Norma came through and I busted her with her pants down. 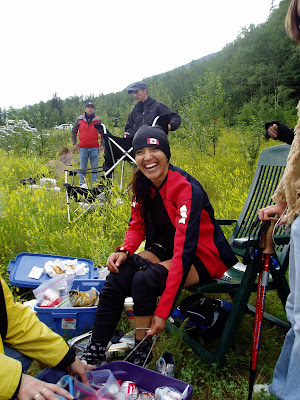 We pumped Eric and Terry up with some hot soupy Ramen goodness and sent them on their way for the long and unforgiving Leg 4. 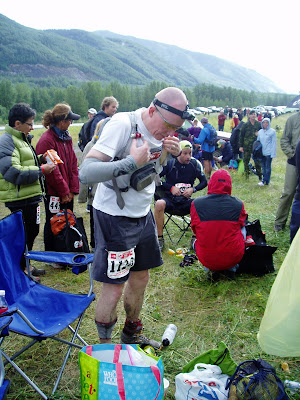 After that, I had my own race to deal with so I went back to Steve and Brendas plush hotel room and tried to catch some zzzz's. I was exhausted! But hey- my friends were out there in the crappy weather running up a mountain, so I sent some good thoughts their way. I thought about Jeff having his beer at the summit of Leg 4 so many years ago and it made me giggle.

I geared up and got a ride out to Transition 5, aka the "night run" with my buddy Allan. I was a little nervous, but very excited! I don't run much in the dark, afterall I live in a place with lots of large nocturnal carnivores. But here I was, gearing up for a night run in a place where there may even be MORE wildlife! As I didn't know any of my team members, it was challenging to try and find a guy I didn't know in transition. Thankfully, I found the Mystery Mans' wife and she made sure that we got hooked up. I found myself lollygagging at the startline and I kept looking forward into the dark night and back to transition, hoping someone, anyone would roll into transition and potentially keep me company!

But, no such luck so off I ran into the very dark night. It took me 10 - 15 minutes to find my legs and footing in the dark and just relax and let the headlamps do their work. After I got used to the dark, the headlamps and got a grip on my senses, I was off!! I spent about 20 minutes in the dark by myself, but as soon as I saw my first headlamp bobbing off in the distance, the chase was on. When I past the first runner in the dark, they were going so slow I asked them if they were soloists, but no. I was getting more and more confident with the lights and the terrain and put on the jets. The night was also pulling me along and the weather was the best that it had been all day. There was no wind, the sky had cleared up to reveal a dizzying amount of stars and the temperature was crisp, cool and carressing in the dark and I was running in the woods, through the night with a shit-eating grin on my face.

The single track was fantastic and challenging and it climbed and swooped and twisted and turned. I was amazed how quickly that I would come across a runner in the dark! I didn't seem to be able to see or hear the other runners, until I was on them. The forest was dark and insulating. I must have past at least 10 runners before reaching the Hell's Gate river crossing. I came across a few soloists as well and cheered them on. I came across a sweet little Japanese girl who was running faster than most of the relay folks and she ran her way to a third place finish! By the finish line, I probably passed 15-20 people in the dark of the woods and nobody past me. I had a great night run! So much fun! I got the impression that there were a lot of relay folks who weren't trail runners and were very new to this whole running-at-night-on-trail experience. I also got the feeling that one headlamp on my head and one on my waist gave me a lot of light and therefore a lot more advantage navigating over all the roots and nasty terrain. Either way, it was awesome!

I crossed the finish line and decided to wait it out with Michelle. I put on my cozy clothes and ate some tasty treats while waiting for Eric and the others. I got to see Neil cross the finish line, as well as Eric and headed back to camp to curl up around 3:45 AM. I would have to wait to see how everyone finished until the next morning.

All of the friends who were soloing finished. With the men, Steve came 13th, Neil finished 19th and Eric finished 20th. Pretty impressive guys! With the ladies, Norma finished 4th and Brenda picked up lots of time on the uphills on the last half of the course and finished an impressive 6th!!

The next day, a very exhausted Leslie was up by 8:00 and enjoyed a breakfast with the North Face crew and got to talk running with Garrett Graubins and the ladies winner, Diane Van Deren. Diane was amazingly coherent after her run, I think I would have had problems stringing together a phrase after such an effort. The whole crew was pretty pumped about the success of the event and seemed to enjoy their first experience at the The Death Race. Hopefully, they will be back next year as a sponsor! Afterwards, we packed up camp and hit the road. I was thankfull my buddy Jeff of Jasper joined me, as he put in those first tough 200km behind the wheel driving, while I snoozed. Thanks Jeff!

It was great to connect, though briefly, with so many friends this weekend. It is always sweet to meet and collect a few new ones as well!

Yet another great weekend adventure - I love this race!

Good grief Leslie, this post makes me want to run the death race like nobodies business. Maybe as part of a team, though :)

Glad you had a great weekend!

Happy Sunday morning to ya! I've been busy running with the lovely and talented Iris the last few days. Talk soon. Post soon.

Yeah, so Leslie, you running it solo next year? You could be one of those rockin' Banff runners, I just know it! It was great hanging out with you - sorry you got to experience me in my anxious form. It's just so hard waiting, you know? Thanks for all your support!

That was "anxious" in a loving, caring, adorable way! Too bad we couldn't get together for a visit closer to home, maybe next time?? Rendez-vous at Orcas Island, perhaps??

Thank you so much for your support on and off the course! You provided the final details that only an experience Death Racer could have given. You filled in the blanks that the race web sight didn't provide.

So when is sunshine girl going to solo this race?

Sunshine Girl loves this race, but she pines for something scenic and challenging with great singletrack that is not so close to home! Any suggestions??

I like the looks of The White River 50 Miler or the Where's Waldo 100k. Both look like my kind of runs.

Thank you for your support. You make the best cheerleader..Your acoount of the race is better than mine! it could have been because of the altitute, my brain wasn't working at full capacity.