I Love You Berg Lake


Ever heard of Mount Robson?  Most good Canadians have.  Especially those people who are lovers of mountains and wild places.  It's the highest peak in the Canadian Rockies, located about an hour outside of the town of Jasper, in British Columbia.  It's everything you think of when you think of the Canadian Rockies: a giant grey behemoth of rock, heavily glaciated, with a stunning turquoise lake at it's base.  It has a couple of  glaciers that run right down it's face and drop huge chunks of ice into the lake below, Berg Lake.  It's other worldly and it's incredible. 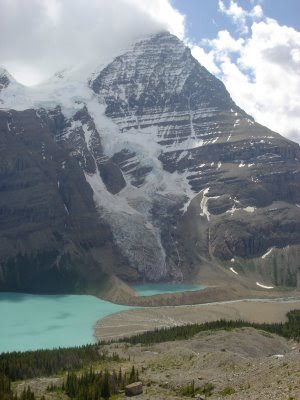 Here's what the Mount Robson Provincial Park website says about the area:

Mount Robson Provincial Park, the second oldest park in British Columbia's park system, is truly one of the world's crown jewels. The mountain for which the park is named guards the park's western entrance. 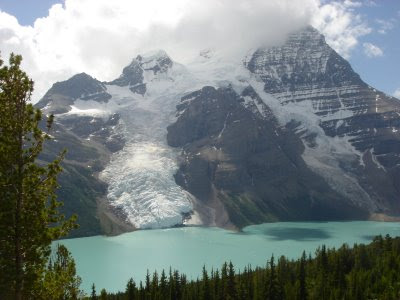 I Love You Berg Lake
The monarch of the Canadian Rockies, Mount Robson, at 3,954 metres above sea level, is one of the spectacular scenic attractions preserved in this beautiful park.  Picturesque waterfalls, massive blue glaciers, pristine lakes and lush valleys endow this special place.  Berg Lake Trail is a world-renowned hiking and backcountry experience.  Berg Lake Trail takes hikers to some of the best scenery in the province. This incredible trail climbs to the shoreline of Berg Lake, located at the base of Mount Robson.  Beyond Kinney Lake, the trail enters the Valley of a Thousand Falls. Fed by the massive Mist, Berg and Robson glaciers, visitors often see huge sections of ice break off or “calve” into the blue/green, silt-laden waters of Berg Lake.

As far as beautiful mountain places I've been, Berg Lake has a special place in my heart.  Once you've seen it, it implants itself in your mind forever and ever.  This trail run has become a tradition of sorts for me, I've run it once a summer for the past 2 years and both times it left me reeling in awe at the beauty of this natural world of ours.  The first year, I did it as a memorable solo run and the second year, I wanted to share this place with friends.  On an interesting note, it's also almost an exact marathon distance of 42km as an out and back to visit Berg Lake.

So, you can imagine my surprise and excitement when I found out yesterday, that there is going to be a race on this special trail, to this extra special place.  The Mount Robson Marathon will be a one-time only event held in conjunction with the 100th Anniversary of BC Parks.  Only 100 participants allowed for the event, with bragging rights and naturally, a permanent course record for all of eternity.  A series of frenzied e-mails to trail running friends ensued and about 7 of us signed up immediately.  Unbelievable!  There's going to be a race.  To Berg Lake and back.  And it's going to be Amazing.
Posted by Leslie at 4:04 PM

Cool! It's so funny looking back on your first trip when you called it the Berg Lake Marathon, and now you can run it with 99 friends!

Are Hargreaves lake and glacier named after Alison? I'm assuming so.

Hi Sarah! Our place names are always waaaay older than that. It's amazing how many mountains, lakes and passes are named after some random British military officer or some wealthy British Explorer.

Here's the story on the Hargreaves Family-

Hugs to you and your honey!

Interesting about the name, Leslie. I tried finding out via google and came up empty! You're better than Google! :)

Hugs to you and yours right back! Reserve us a space in an unofficial version of the BLM for some year in the future. Must see that area, it looks incredible.

Wow, the marathon is already at capacity. Too bad!

Ooooh! So sad you missed out Don! Yup, as soon as I heard about it, I checked my calendar and signed up! Cuz' I love Berg Lake!

Oh, I want to backpack to this lake!

Yes, you surely do Mary!! It's on many people's backpack "wishlist". The scenery is truly, out of this world - and there's a ton of exploring to be done from there as well. One day, I'm going to go in and stay for a few days!!!

SOOO Jealous! I would love to go just to cheer you on Leslie!
But I have other commitments...I have been asked to coach the local run club next fall so I will be attending a local x-country race with a group of elementary and jr. high kids.
Very excited for you!

Looks awesome! What a great race! I am loving my 'nice ride'! It's already been a good buy. Yeah Murray is pretty cute too!

Hi, I came across your site and wasn’t able to get an email address to contact you. Would you please consider adding a link to my website on your page. Please email me back and we'll talk about it.