After many weeks of grey and overcast weather, the sun made itself known again this past week.  We're not used to be sun deprived here, but it has been unusually grey and cloudy since I've returned home.  It's also been snowing a lot up in the mountains - the skiing and snowboarding is fabulous right now.  The return of the sunshine has felt more glorious than ever!  There's just something magical about a bluebird day in the mountains. 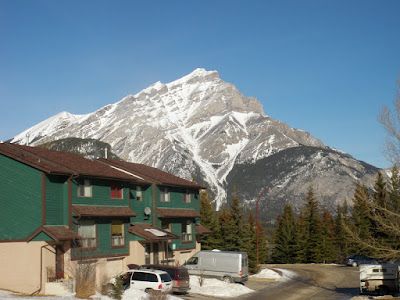 Out my front window
We've had new friends staying with us the last week, in the form of 3 energetic and fabulous girls from Denmark.  Mette, Maria and Sarah have been skiing every single day since arriving and have had nothing but sunshine.  Their smile muscles are getting sore and they are enjoying every moment of their time in Banff. We've been feeding off of each others energy and enjoying the company. 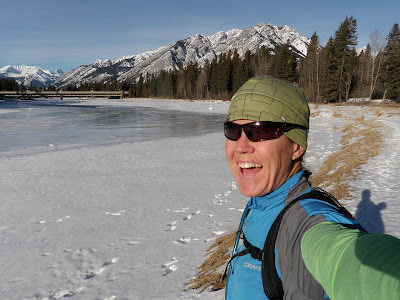 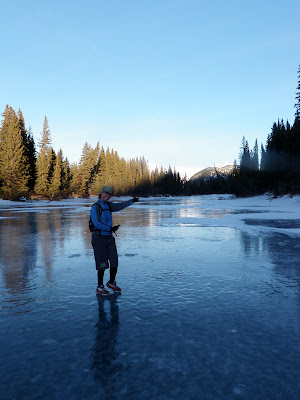 Me, on the Bow River
The lovely Maria joined my for a late day run on Friday, when the world was a glow in gold on the ice and snow.  The light was magic, the mountains alive and even the wildlife came out to play. 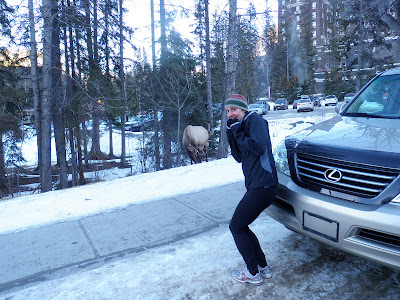 Maria, the Elk and the Banff Springs Hotel 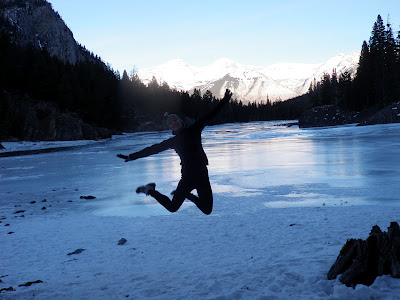 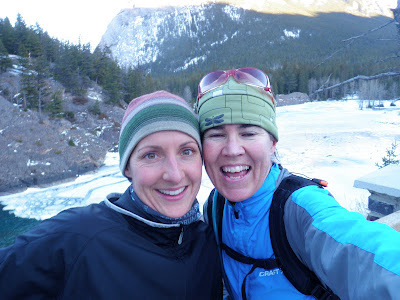 How do I see out of those things?
As we were running along she said "It's unbelievable.  It's like running in a Postcard!!"  I couldn't agree more.  We do live in a Postcard and it's great to be reminded by someone with fresh eyes. 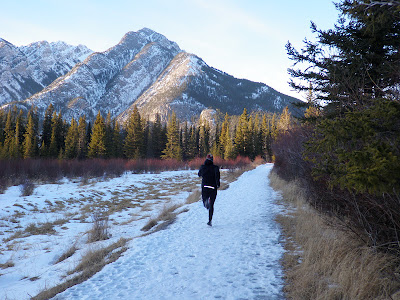 Late Day Sunshine
Good company is always welcome on the trail.  Speaking of which - last weekend I finally connected with Mike who has been one of my most consistent trail buddies in recent years.  I haven't run with him since I've been back in town, so we had lots of trail time to catch up.  I've convinced him to come join me on a June road trip for the Pocatello 50 Miler.  Angela is going to join in the fun as well. :) 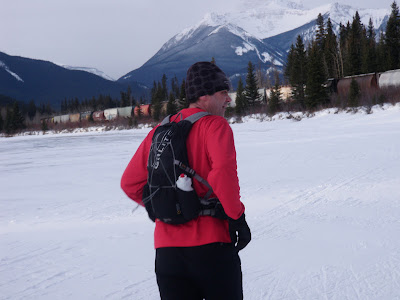 See Mike Run!
I also had some great ski time and play time with Angela. We were surprised at the amount of snow up on Sulphur Mountain and had a post-holing adventure in deeper than expected snow.  It was a brand new PW or Personal Worst - the slowest amount of time we have EVER taken to get up the mountain.  It was a total slog.  Angela got her pack snagged by a tree and ended up on her ass. :)  That was comedy. 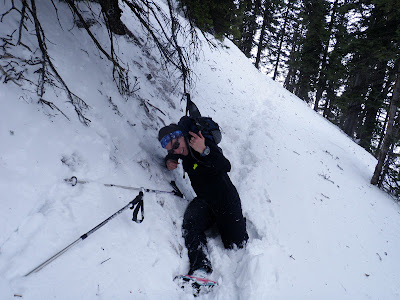 ....and then there was a glorious ski tour up at Sunshine.  We couldn't have asked for a better day and the air temperature was so warm we all stripped down to our base layers.  Sweet!! 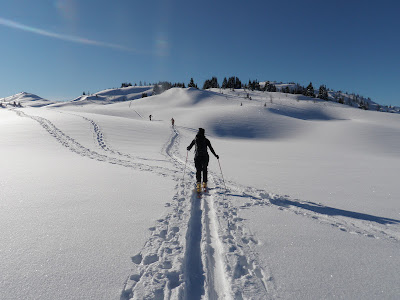 The snow had the most sparkling, enormous crystals I've ever seen.  They were exploding into clusters in places and made a unique sound under the ski.  The snow was incredibly fast and it almost sounded like glass shattering when you carved a turn. 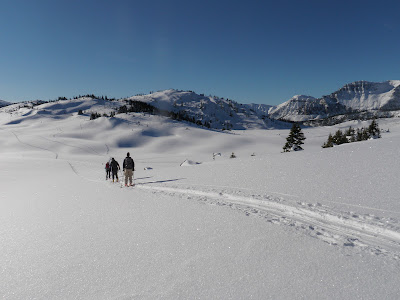 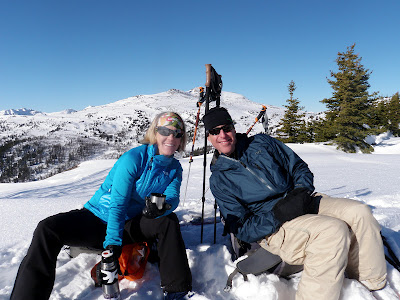 No ski tour is complete without a picnic and a thermos.
Keith and Suzy do it Right. 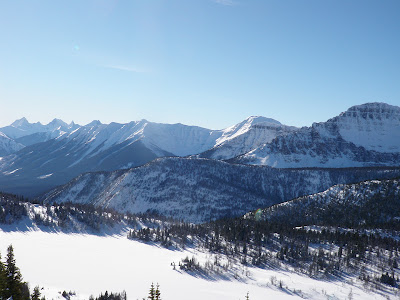 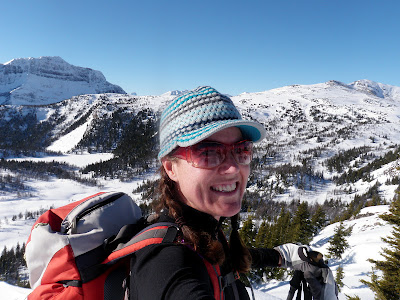 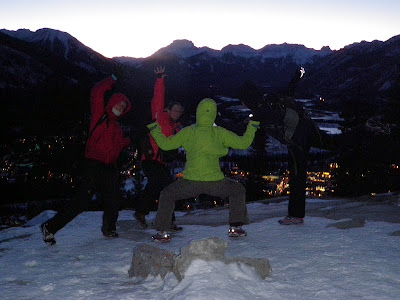 We dragged our exhausted butts up Tunnel Mountain on Saturday night and Mette, Maria, Sarah and Angela did a Happy Dance as the sun set.  It was picture postcard perfect. This mountain living is hard work. :)

I love that you love where you live so much, but then, how could you not!!!! That view from your window is none to shabby! What adventures you've been having. Tell you what though, you shopping bill must be ruddy expensive to fuel all that sporting joy!!!!!

Lovely! We've had tons of sun this "winter" for some reason. Strange times.

Wonderful 'Post card' shots, but where's one with the full moon?
re world cup skiing - we always watch like events. Frank for the skill, me for the scenery!

It is so true. Sometimes it is easy to become complacent and it is always a pleasure and an honour to see our home through someone else's eyes. It is like seeing it again for the first time and sharing the excitement all over again. Nice opening pic of Cascade. Great photos. Thx for sharing. Just finished writing Hetch Hetchy.

Hi Kaz! Great to hear from you. :) And yes, the grocery shopping bill was a little out of control this week with the company. As for me: I have learned that I am the bottomless pit of eating. At first I assumed that all of my Ultra friends were the same way - but I've since established that I'm in a league of my own. :) It's a good thing I don't drink much.

Hi Danni! Strange times indeed if you are getting Sunshine in the Flathead Valley. Send it our way, please! I've been loving it and my solar powered week.

Hi Helen! We enjoyed an amazing full moon ski last night. I should try and get up the pictures for all to see. Glorious powder turns by moonlight is pretty special. But it was too cold for the Leslie Moon to make an appearance. :)

Hi Barry. I couldn't agree more, it is fun to share our home and our little corner of paradise for exactly that reason. My friend Danni (see above!) calls me the "Banff -ass-ador" Get it? :) Got to check in and see what good things you've been sharing...

Rough life - living the postcard and all ;-) You have it great and you don't take it for granted - that's the way to live!!! Happy, snowy trails to you!

Hi Leslie...my name is Sandy McCallum. I live in Florida, but I hail from the Calgary area. I am registered for the Tor des Geants this year and I was hoping I could ask you a few questions about the race. My email address is sandy@saharaodyssey.com Would sure love to hear from you if you have the time.

I enjoyed reading your blog, and your pictures have made me more than a bit jealous of some of your runs. I live in the city, and I hardly ever get the opportunity to hit the trail. While reading your blog, I thought your site might be a good candidate for a potential partnership with nSphere. nSphere is developing a local search tool that I believe would be a good fit for your site. It would allow your visitors to connect to a rich source of relevant data while remaining on your page.

Is there a better way to reach you? You can contact me at tgennaro@nsphere.net.