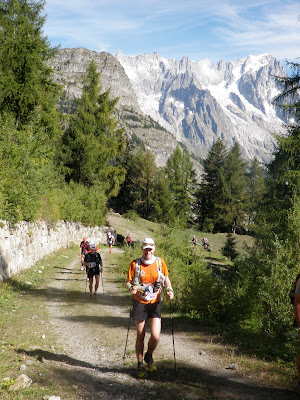 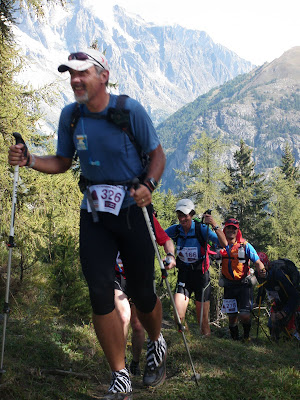 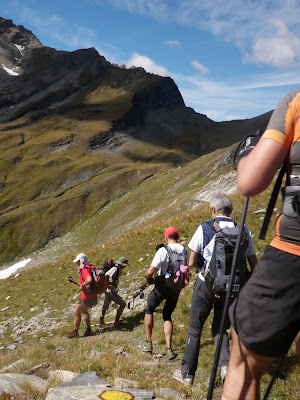 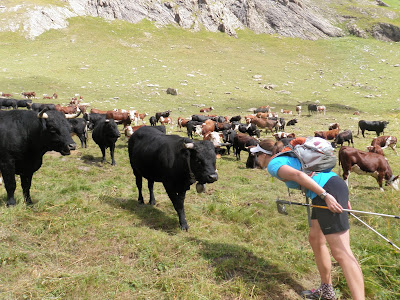 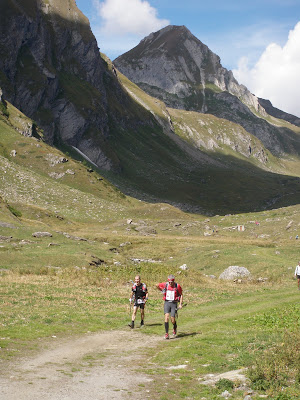 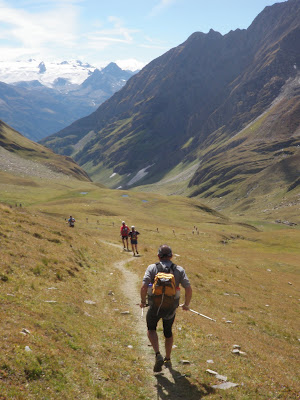 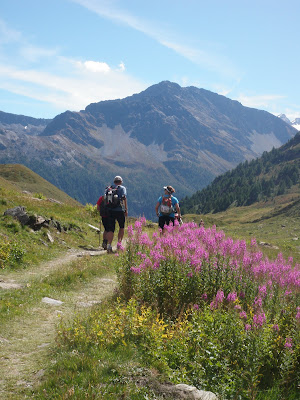 The first major aid station was in La Thuile and we got our first glimpse of the food being offered. We had cheese, bread, dried meats, salami, dark chocolate, a huge bowl of prunes, a huge bowl of dark chocolate, cookies and sparkling water, red wine and beer to round up the buffet. It was good entertainment to see some of the Euros partaking, evidently, beer is good fuel. I made up a couple of sandwiches and Angela and I, hit the road. It was already mid-afternoon and we still had 2 more passes to climb.
Posted by Leslie at 8:22 PM 10 comments: 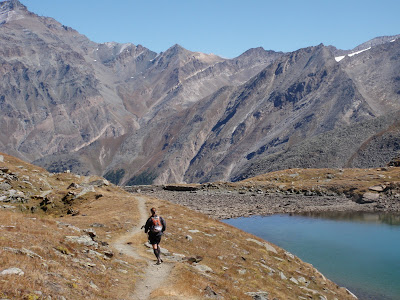 I fully knew what I was in for when I signed up for the Tor des Geants. As a high alpine mountain race, with a crazy-ridiculous elevation profile, 25 mountain passes and the lure of running on the famous Alta Via trails of Italy beneath the shadow of Mont Blanc, I was instantaneous and totally smitten. It was a race that appealed to me because it was full of all of the things that I love about the mountains: incredible scenery, constant elevation change and the challenge of it all. But most of all, it was the place that beckoned: I wanted to explore this mountain place and run on the trails of the Aosta Valley until I couldn't run anymore. 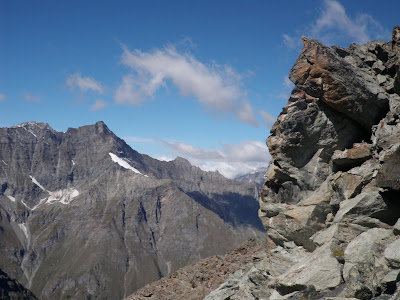 As I prepared this summer for my Big Adventure, I had to ignore the numbers of this race. They were just way to scary and intimidating. Both the distance (330km/200miles) and the elevation (24,000m/80,000ft) were off the scale, so I was entering brand new territory as a runner. I started the race feeling pretty solid mentally and physically, but I'm a realist - I know shit happens when you try and run for 7 days. My level of excitement was as huge as the Mont Blanc, I was stoked to be here in the place and to be running on new trails into new territory. The Alps were beckoning. 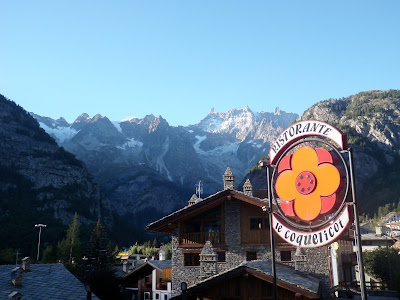 We arrived in Chamonix in the dark and when I awoke and saw Mont Blanc and the Mer du Glace out of my window, I was awestruck. I had totally forgotten just how gorgeous that mountain is. When we drove through the tunnel from Chamonix, France to Courmayeur, Italy I got to see it it from a whole new perspective. Mont Blanc became Monte Bianco and it was evident that the Monte Bianco was a mountain to be revered, respected and celebrated in the Aosta Valley. 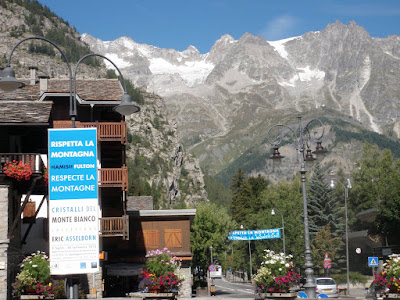 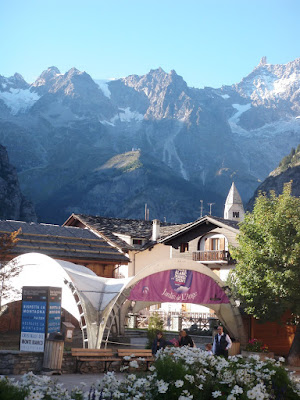 This was the first year of Tor des Geants and as a North American in an inaugral European race, we were all thrilled to find out that Yes, there actually was a race going on. It was also a meeting of friends, some old and some new. As well as my Tip-Top lady friends Angela and Nicki, we met up with friends Tim and Doone Watson, Michael and Tamara Cartright, Mark Hartinger, Glen and Tanya Meeth, Craig Slagel, Beat Jagerlehner, Bruce Grant, Daniel Probst and Jen Segger. It was awesome spending some quality time with these good people. We were all lovin' up Italy, smitten with Courmayeur and ready to run. Now, I know you're not supposed to try anything new for a big race, but I couldn't help indulge in the pitcher of wine at the pre-race pasta party and I couldn't help stopping for a 2nd coffee only half an hour before race start. 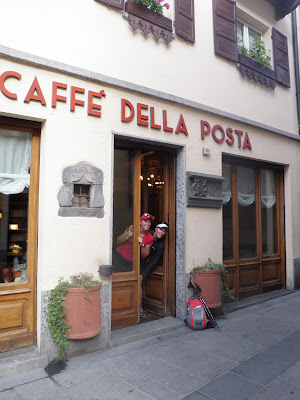 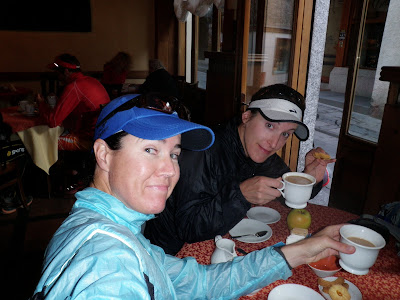 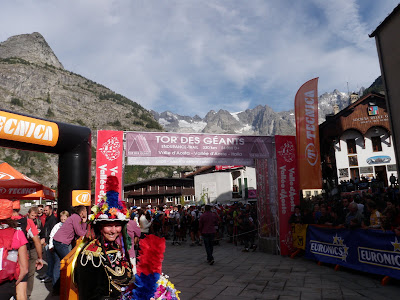 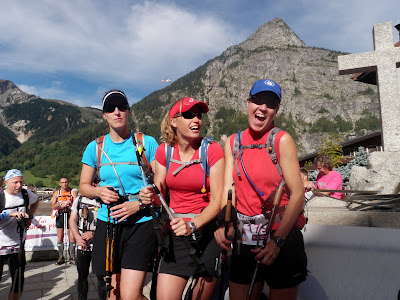 The Girrrrls: Angela, Nicki and Leslie 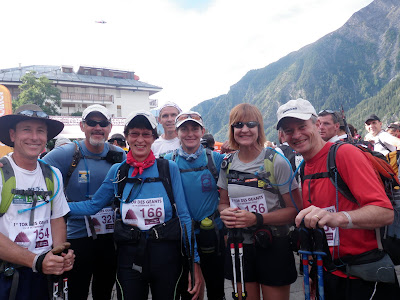 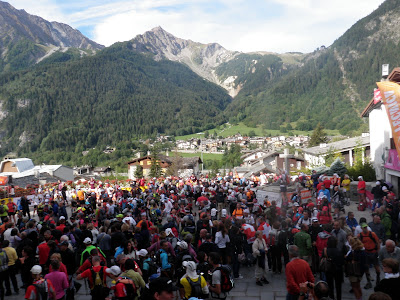 Wired on coffee and grinning like a crazed fool, I was beyond excited at the start line. I wasn't nervous, just full of stoke and fire for the promise of a big adventure. The start line was fantastic, electric and so Italian. Music, costumes, people, athletes all together. Organized mayhem to start the day, as we ran, joyously through the streets of Courmayeur.
Posted by Leslie at 7:38 PM 13 comments:

Running: It Warms the Heart

It's a beautiful day in the Most Glorious Place on Earth - the town of Banff, Banff National Park, Alberta Canada.

Damn, it's good to be home. Life is good when you come home from a kick-ass holiday and you're glad to be home. Coming home to Banff is always like that whether it's 2 days or 2 weeks. When I pull into my drive way, there's always a deep exhale of breath, pleasure and the warm-fuzzy feeling of Pheeeeew. I'm home. Yes.

My adventure in Europe was exactly that - a huge and monumental journey in every sense of the word. I survived 3 days of Tor des Geants and it was so awesome. My 3 days on the trail were absolutely mind-blowing and a joy to spend in the company of my friend Angela. We had a lot of fun. Nicki said it best when she described this race as "the most mind-blowingly beautiful, well-organized, soul-destroyingly difficult and memorable race I've ever done."

Unfortunately, I injured myself and called it quits at the end of Day 3, almost happily. I hadn't quite got to the "soul-destoyingingly difficult" part of this race, but I certainly had a good taste. I had 3 of the toughest mountain days that I have EVER had on trail and loved every moment of it. As well as the race, my time spent enjoying the company of good friends was equally as enjoyable, as was the short trip I made after the race. All and all - a great European adventure.

Naturally, I'm putting together a blog post to share my thoughts and photos. My 3 days were a bit of a blur of mountains, high mountain passes, people and lack of sleep. Hopefully, I can put it all into perspective. Congrats to all of the finishers of this race - especially to Angela and Nikki and the rest of the contingent, Bruce, Beat, Dan and Craig. To finish this race is impressive beyond words - so congratulations my friends!

Today, is the annual running of a Banff fall tradition - the Melissa's Road Race. It warms my heart to see the town full of runners, appreciating, enjoying and running through the town of Banff. So, congrats to all of the fine people who ran their first 10km or half marathon right here in Banff. It impressed me to see the back of the packers, struggling, moving forward one step at a time. I was out there cheering, shouting out loud: You Guys Rock! Go Runners! You Can Do It! I just wanted to share the love. The love of something so simple as putting one foot in front of the other. 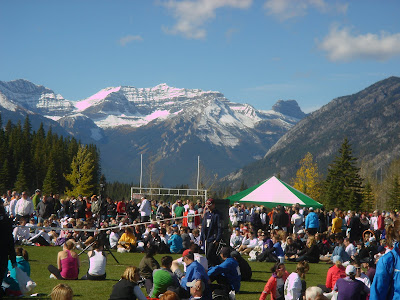 Saturday, September 25th - Melissa's Road Race 2010 Edition
So, here's to running! You bring me so many good people, good places and beautiful adventures. Thanks to all of the friends who attempted this crazy-ass-silly-fun-ridiculously-challenging race in Italy - the Tor des Geants. Wasn't that a grand adventure? An even bigger Congrats to those of you who got to the finish line, I'm forever impressed with your strength and mental fortitude.
Posted by Leslie at 4:09 PM 9 comments: 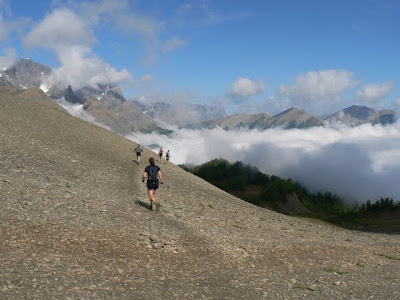 Numa Pass
It's been a great summer. I've managed to squeeze a lot in, maximize my 3 day weekends and run, run, run on more beautiful trails than you can imagine. I sure do love my backyard. 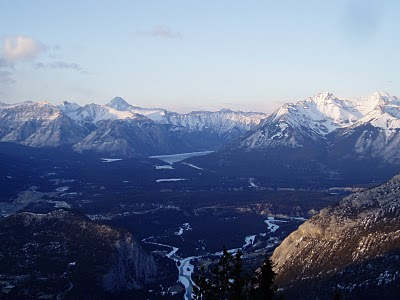 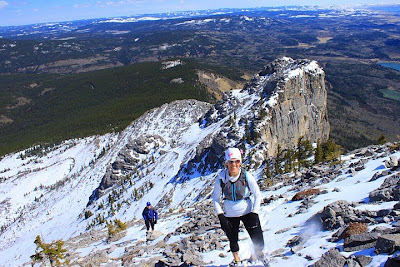 I've spent some quality time on trails with lots of new and old running friends as well. I remember my first year in Banff, I spent the entire summer running these Epic Long Runs, all by my lonesome. It was good stuff, but it was lonely and at times, a little scary too. Things sure have changed. I've got lots of good buddies to run with now and my hubby, who is no longer chubby, is also a trail runner. Time flys when you're having fun and Keith and I have just celebrated our 6th year of living in Banff. 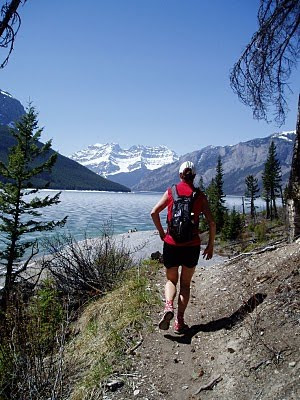 It's all still one big adventure. I love that word, adventure. It's all things good to me. Fun, challenge, spontaneity all rolled in to one. On that note, I'm off to Italy tomorrow for One Big Adventure. It's time for Tor des Geants! It's going to be new territory for me. With 200 Miles of Fun and a ridiculous-off-the-scale amount of elevation gain and descent, it's too scary and intimidating to even ponder seriously. So, what do you do if you're Leslie? You focus on the adventure, the scenery, the people and the place. And hope for the best. Afterall, it's all one big adventure and adventures are so much fun!