This past weekend, I got to enjoy 3 runs in 3 days. With the spring-like weather, I have forgotten all about ski touring. I was reminded of the wrath of winter, when we got hammered with a little spring storm on Wednesday. It probably would have been better to be skiing, but out I went into the snowy woods. Having a 100 Mile race on the calendar in June, has me running scared. Only 2 months to prepare is what my subconscious is telling me.

After a snowy run with Keith on Friday, Angela came up for the weekend to run around the woods with me. We got 6 hours on our feet on Saturday and another 3 on Sunday. Time on the feet, right?

Saturday morning's warm-up on the Spray River -Quarry Loop, was so pretty with the fresh snow and I was beyond excited when we spotted these ridiculously fresh prints in the snow. I was sure it was a smaller Cougar, until I got home and I looked at the photos. Then I just got confused. I had myself a 5 toed mystery on my hands. A Rare Breed. 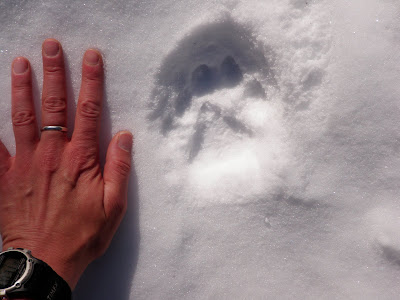 Cougar's have 4 toes, wolves have 4 toes and claws and this doesn't look anything like a bear. What the hell was it? 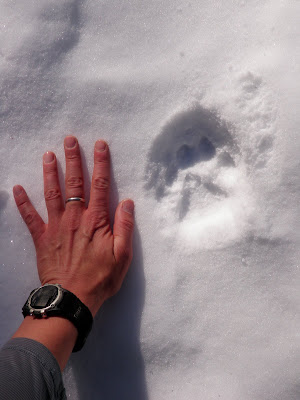 I sent my friend at Parks Canada a note, who is knowledgeable in all things big and fuzzy. I asked for help identifying the mystery animal, because I thought I had found a mutant Abominable Snowman or Killer Snow Turtle.

Her response to my photo was this: 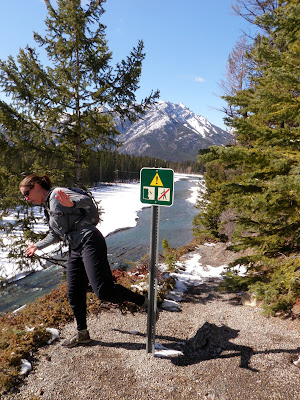 So, the mystery was solved and I learned a little something. Who knew animals walked in their own tracks putting back feet in front footy prints? Maybe the cougar was just grumpy like me and didn't want to get his/her feet all cold, wet and snowy. The rest of the run zoomed by pretty quick like, that's the nature of being in good company. She's a rare breed that Angela! 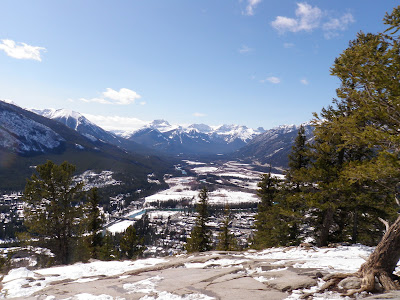 It turned out to be a beautiful day and in the 6 hours we were out running, lots of the snow melted down in the valley. It's 4 days later and it's disappearing quickly. There are double digits forecast for the next 3 days! It's supposed to be 17C on Saturday. Whoa. 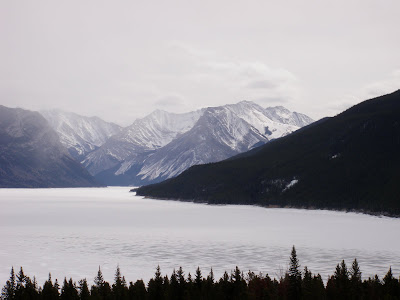 We followed Saturday's run up with 3 hours on the shoreline of Lake Minnewanka. Keith joined us for the fun and we ran into Steve and Brenda. It's always laughable when you run into people you know in the middle of nowhere. I think I've been out there every weekend for the last 2 months. It was dreamy, as always. It was good to run something fast, flowy, runnable and cruisy. Not that we were fast, but we were flowin'. 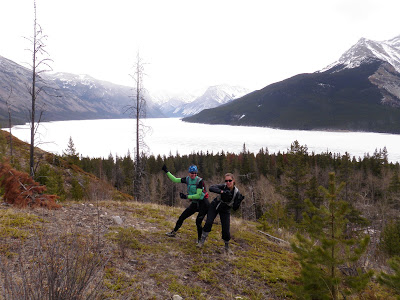 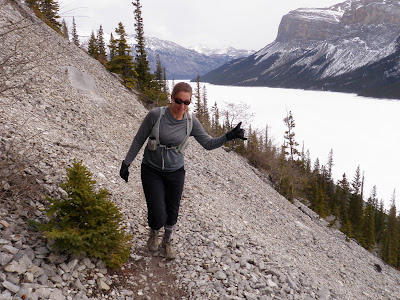 Lynx was my guess! A friend out that way came across one years ago and got some great shots of it! Either way, cool pics!!

Oh what fun! I love tracks. And running -- I love running.

Hey Gary - nice running at Diez Vista and a course record, to boot. Hot damn, you's on fire! The kitty cat tracks were SO fresh and so close to town. It's a good reminder for me to remember to be aware of my environment whether I'm 5 minutes or 5 hours out on the trail.

Hi Danni,
I love running too! :) Glad to hear you're back in the saddle!

Is the Minnewanka shoreline clear of snow again? You posted some wonderful Minnewanka-to-Ghost photos a bit ago that were dry and beautiful, but I'm guessing the recent snow changed that. I was hoping to get out there this weekend, so if you know how dry most of it is now, that would be helpful.
Thanks!

Good to meet you!
Would you believe the snow is all gone again? And last weekend the friends went out to the Ghost End and ran into Blackrock! The photos looked awesome. Trust me, the shoreline is so dry it's dusty! There was a wind storm last week which deposited at least a dozen trees between the trailhead and LM-8 - so I'm wandering how many MORE there are out there on the trail....


Why hello Sonya Super Woman and THANKS! I've missed you. I'm not sure I've even had time to say:
CONGRATULATIONS!
I knew you were going to do well in your 100 Mile debut, but Holy Crap.

For any of you out there who geek out on such things, Sonya ran her debut 100 Miler in 20:58 minutes and placed second, OVERALL.
Ai-Yai-YAI!!!

Way to go chicky. Now go crawling back to the speedy Triathlon world you came from and leave the slow and steady to me.... :)

Thanks for the trail report! We're coming in from the Ghost side as well, so that's great to hear. Hopefully fewer trees though.

We have met before, actually. I found your blog in December, and ran into you on Sulphur Mountain the next day, with another girl, guy, and a husky.
And then I looked through your archives and realized I'd crossed you twice before.
Last summer, while you were doing this:
http://banfftrailtrash.blogspot.com/2009/08/butt-epic-day-5.html
I was doing this:
http://littlehost.no-ip.org/~rachelo/hiking/html/trip_reports/09.07.30-rockwall_page02.html
I remember your group crossing us near Wolverine Pass (I think it was) in the afternoon.

And the year before, when you were doing this:
http://banfftrailtrash.blogspot.com/2008/08/return-to-yoho-hot-summer-fun.html
I was doing this:
http://littlehost.no-ip.org/~rachelo/hiking/html/trip_reports/115-iceline-summer_2008.html
You ran alone past us along the switchbacks, then took off for Yoho Lake and passed us again on the Iceline proper as we continued to plod our way.

It was funny coming across those reports and having the memory pop up, then comparing dates to confirm.
So hello for the first official time... :)

But of course I remember you! You made my day when I saw you on Sulphur. And I remember your group from our day on the Rockwall. It looks like you've been getting out lots! That's good, it will make your summer backpacks that much more enjoyable with the fitness and legs you'll have maintained!

You're not the first one who has seen me out there a few times. I remember running into this older gal on the Sawback Trail one day, which I was running solo and she said "OMG - it's YOU! I met you last year on the Skyline Trail! How is it I plan one big trip a summer and I run into you both times?!?" Which is rather coincidental when you think about it...

What backpacking trip are you planning for this summer Rachel? Let me know if you need a suggestion!

Cool track!
I recognized it right away - bearsquatch. That's the only logical assumption!
I think you'll do well in your hundred. You're pretty much always trained-up.

I must admit, as we don't have any scary beasts here in sunny Scotland, seeing tracks in Canada both excites me and scares the crap out of me! My hubby and I hiked up to Moraine lake (road was closed due to late spring snow) and there were bear tracks everywhere and I had that 'just about to start a race need to go to the loo' the entire hike! Ha Ha

Been having some of my own adventures myself this past week. Can't wait until they can be done at a running pace again, but been loving hiking in the mountains!

Good luck with your training for your race.

I think you crossed us on our most drudging day of the rockwall. The running looked like an awesome alternative.

This summery spring weather has been AWESOME.
Thanks for the trail conditions - we found the Minnewanka trail pretty much dry west of Lm22, but a few muddy sections along the Ghost Lakes. Ticks were AWFUL in the trail between second ghost and The Narrows, but the low water levels let us switch to beachwalking for the way home. Creepy night encounter with what we (with the help of the Banff visitor centre) have best guessed as wolves, so keep an eye out if you're out that way again.

Sadly, no big backpacks planned this year. It's going to be a busy summer with work and some other things, so a Canada Day trip to Top of the World is the only multiday on the horizon. *maybe* something around Labour Day, but we haven't figured that out. I have a few nice long dayhikes in mind though. :D

Hey, how'd Bryon get up there and leave that track? For it can only be the Red Haired Man Of The North!

Hugs! I miss you, Leslie!

I know there will be many difficulties and challenges but I am determined to do it. If it does not succeed then it will be a lesson for me as well
catmario4.com