First, a quick snapshot of Keith and I pre-race yesterday morning at the start line of the Stinson Beach 30km trail run: 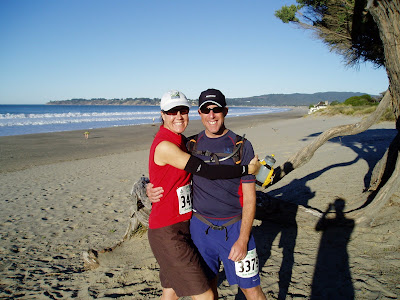 Awwwwww!?! Aren't we just the cutest?? And does this look like the San Francisco Headlands in November? I was prepared for cool and windy with a side of rain, but hey - we were pretty stoked with this finer than normal weather we were gifted.

For contrast, this was taken 24 hours later out of our front window: 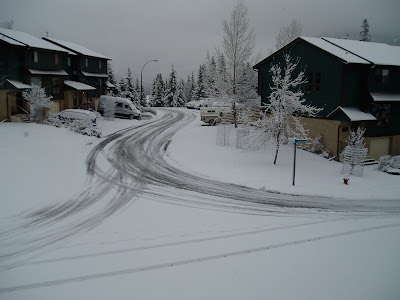 Can you spot the difference?? Yikes.
Yesterday, we were blessed with some pretty sweet Northern California weather for our "Anniversary Run" at Stinson Beach. It was awesome! And my husband was a super-star. I am still in awe that he even agreed to go on a "running holiday" and let me beat him up for 9 days and then run a 30km race together at the end of it. I think he loves me! I am a lucky girl. 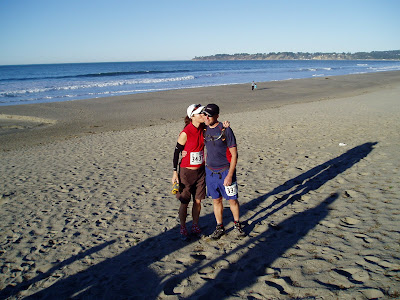 Keith fueled up the night before with a Guiness and a Blue-cheese and bacon burger and we found a place to stay a block from the start line. It was great to just wake up, eat and stroll on down to the start line. We got there early to enjoy some "Pre-race" time and hopefully see some familiar faces. 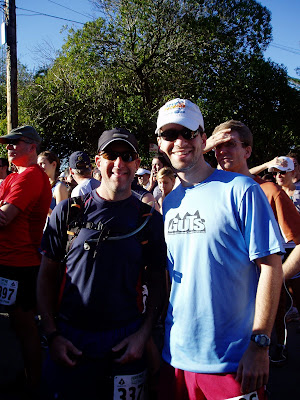 It was great to meet Dave of Atlanta Trails, who has dropped off the face of the blogging world after moving from Atlanta to the Bay Area. It's all good Dave - we Get It. Grad School is sort of busy like that! 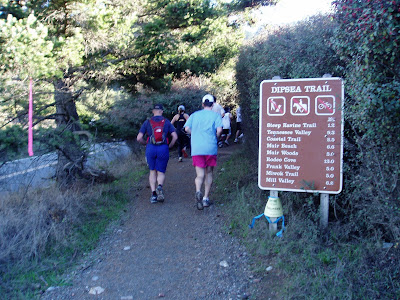 Keith and Dave heading out and UP!!
We got to enjoy the first bit of the run with Dave, who was running the 20k. As we headed out of town to join up to the Dispsea trail, there was a massive bottle neck of runners all waiting to get on the single track, which was pretty entertaining. Good thing we weren't in a hurry! The race had over 450+ people with a 12k, a 20k, a 30k and a 50k option available. When we hit the Dipsea we could see the runners off in the distance heading up towards the Steep Ravine Trail. 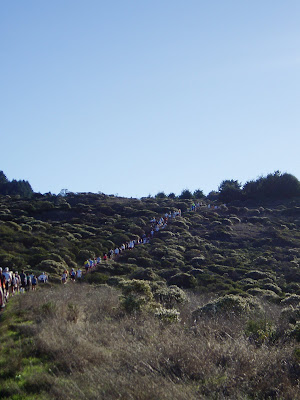 The famous Dipsea Trail and Steep Ravine were as gnarly as I had anticipated and we all walked this section together as one big mass of runners. You couldn't have run anyways, with the volume of runners on the trail. It was a great slow start and forced march for Keith, who has the habit of going out a wee bit fast! The trail was cool, dark and moist but we were already sweating buckets on this warm November day.
After about 55 minutes of trudging upward on the steep trail, we finally emerged from the ferns and redwoods into the sunshine of the Bolinas aid station. En route we picked up Neil, who was a great pace match for Keith and we ended up running with him for the duration of the race! He had done the Hawaii Ironman 4 weeks ago and was rocking the 50k on this day. More importantly, he kept Keith chatting and distracted for the entire duration of the run! A super nice guy.
After the huge elevation gain, when we finally came out of the forest, the trails and views just opened up. It was a FINE day to be enjoying a sweet trail run in a beautiful place. And the company was good, too! I had not one, but two boys to run with!!! 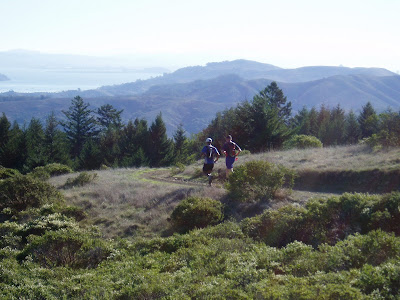 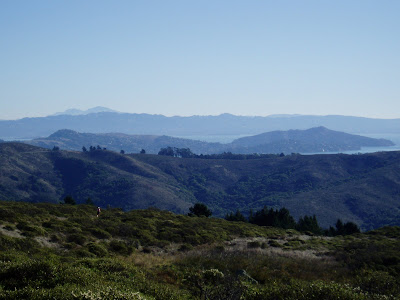 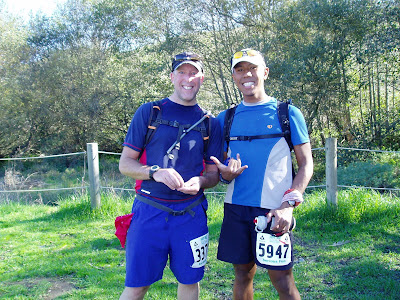 The descent down into the town of Muir Beach was so much fun! The boys were rocking it when we hit the aid station and turn around. From there, we had a little reprieve on the flats before another big climb back to the top, where we enjoyed some more sweet coastal views. 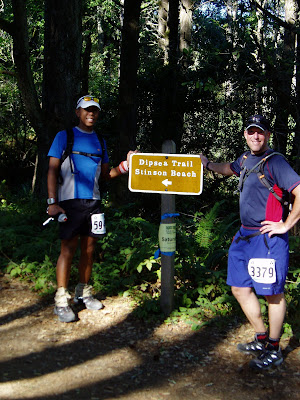 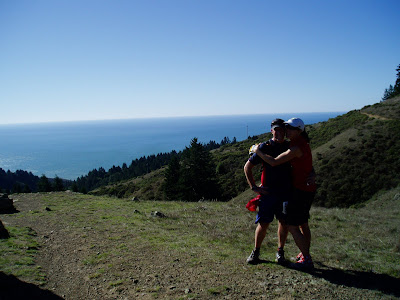 Pause for smooch - (He didn't want to Stop!) 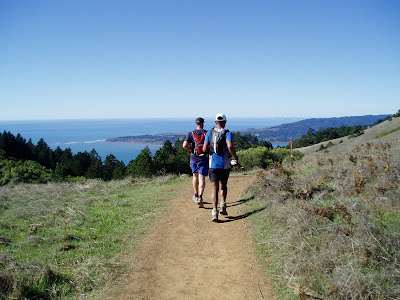 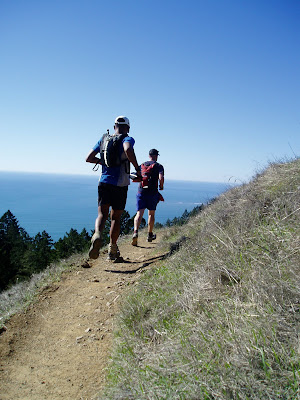 The descent back down to the finish line at Stinson Beach was more great single track, twisty-turny, rooty, technical and F-U-N! The boy was starting to run out of juice at this point, but he sucked her up and got 'er done. His downhilling has improved hugely just in the past few months. Superstar! Bonus stars for you. 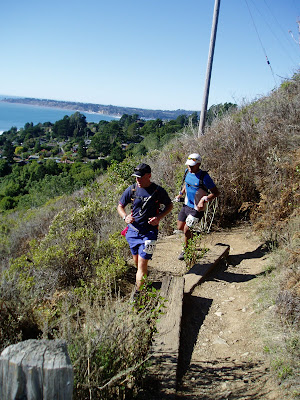 Too bad he was too tired to carry me across the finish line of the Anniversary Run and he didn't take me up on the offer to carry him (next time, honey!) but he had fun, was stoked to be out running around on the trails and was thrilled to finish as a solid mid-packer! Yeeeah-honey bun! He ran strong, smart and happy. 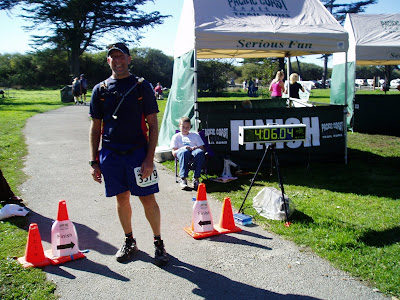 The Pacific Coast Trail Runs team serves up a great event. Wicked course, great trails in pretty places and awesome aid stations and organisation. Maybe Keith and I will make it an annual event!! 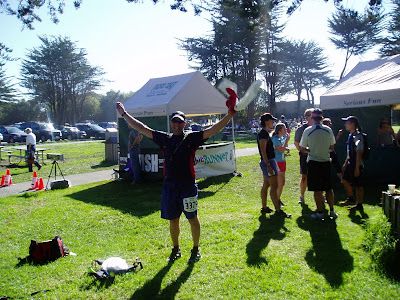 Happy 10th Anniversary Keith! Love you and thanks for a great week and a great Anniversary run!

Ok...OK...I did the running thing. Now can we just go Ski Touring all winter?

(I promise to 'hijack' Leslie's blog a few times this winter and force all you runners to look at snowy pictures of all Leslie's favorite mountains!)

And honestly, I love the running, and plan to be a member of Leslie's running crew indefinitly!

It was great to meet you both yesterday! You seemed to have as good a time as I did.

And I'll write up a report on this one...promise! For that i will have to hijack some of your pictures though!

When are you coming back down again?

Happy Anniversary! Way to celbrate those years together. Enjoy your snowy return to home.

Happy Anniversary! I really wanted to meet you at this race but I bagged it. I decided to take it easy for a while so I am totally not ready for a 50k right now.

You picked a great weekend to come out and visit. The weather has been fab!

Great to see you again, Leslie, and so wonderful to meet you, Keith! We're SO honored that you'd come all this way to celebrate with us - glad that we paid the extra fee for the summer-like weather!!

Hope to see you again in April on Diablo. In the meantime, enjoy the beautiful snow!!

You guys really are an insanely adorable couple! I miss the PCTR crew and the headlands!

Hey Dave!
Great to meet you and thanks for the mini-sing-along. Wasn't that a great day? It was a fine way to end our holiday! I'll be back for more events now doubt, I just need to decide which one! Y'all got to many great races to choose from...

Hi Michelle!
Thanks and maybe it will become an annual event?!?

Hi Tanya-
Bummer I missed you. Next time?? What's on the agenda for you?

Hi Sarah!
Thanks for another great race. You guys rock. And hey, you organise great races, too!! I sure hope to make it out to Diablo again, it was so much fun.

That's one heck of a long conga line!

Happy Anniversary you two - Great run pics, looks like a fun course! Still quite cool back home so enjoy the nice weather - Hopefully we'll see you on the ski trails this winter?
pv

Thanks Phil and aaaaawesome, Sarah!