How to Maximize Your Weekend

1. Get to know a new friend!
First thing on Friday morning, I was super-excited to have a running date with the lovely Danni of Kalispell. Like in a teenage giggling girl kind of way. Danni and I are new-ish blogging friends and I had been hinting to Danni that Banff was a mere 5 hours away from her home in Montana and she needed to come! She was in town for a little Thanksgiving getaway with her hubby and friends, but I'm so glad she put aside time for a run with me. It's always great to have new company on the trails and while Danni and I were running and chatting, 3 hours disappeared. We had a great time. I have been christened The BanffAssador. You know what they say, time flys when your having fun and running in pretty places with good company! Thanks so much Danni! 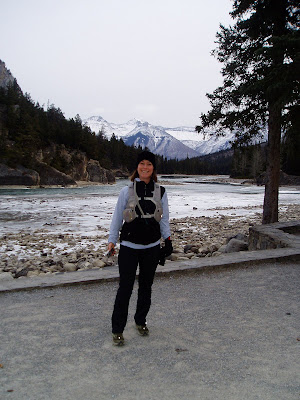 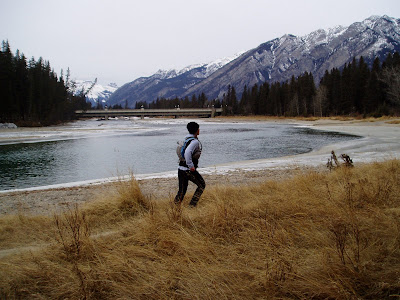 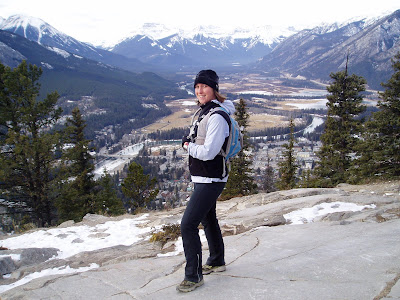 So after my 3 hour run, I really hadn't planned on doing anything else except maybe taking a nap. But instead, I went down to the garage and started digging out all of my touring gear, skis-check, skins-check, batteries in beacon-check. That got me excited so I decided I needed to go take all of my gear out for a test run!

So, I picked up my Season's Pass, got a road coffee and drove up to one of my favorite places in the world: Sunshine Village. And I was excited. 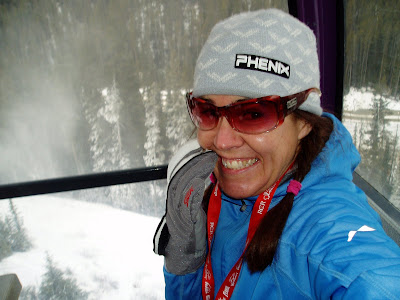 This is me riding the gondola with the "oh my god I'm so excited it's the first day of ski season I'm going to pee" expression. And I was. But I didn't. 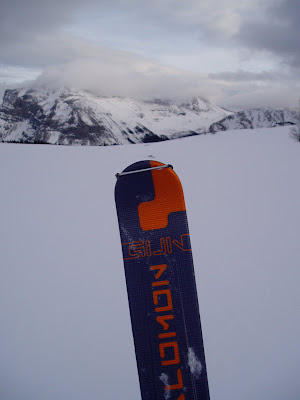 I decided that I just would just go touring around Sunshine Meadows, see some pretty scenery, get some exercise and try out my gear to make sure everything was working fine. Well. First thing I did was bust my collapsible pole and I didn't have any duct tape in my pack! So, a great lesson only 5 minutes in - note to self, always have duct tape. But I know that, it was such a first day of the season mistake. I still went touring, with my skins and one pole I could still motor pretty good. I had such a great spontaneous trip! When I got back to the chairlift, I realized that I had been out for 2.5 hours of hard work and my smile muscles were sore. 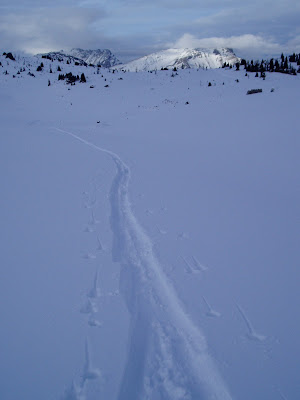 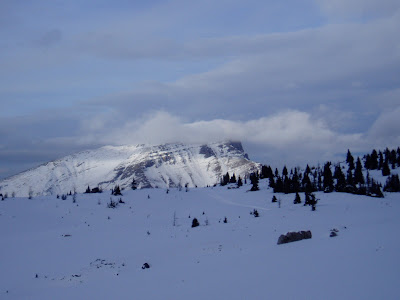 When I finally got down the gondola it was getting dark and I was starving. To finish up this fantastic day, I went straight to the Saltlik Lounge to enjoy my favorite Banff burger: a 3/4 pound burger made with Sirloin topped with Mushroom and Gruyer with a mountain of skinny fries on the side. Oh. My. Goodness. It was so good. I would make a lousy vegetarien. I crave. The Beef. Needless to say, I slept really well. And needless to say, I had enjoyed a rather awesome day!

The weather here has been really strange this November. We have managed to escape the entire month of November with very little snow. Last week, the weather got cold and something quite amazing happened. All of the ponds, lakes and even the river froze to perfection and no snow has fallen! When the snow falls, you can't skate. So after my morning cup of coffee and the advice of my friend Dave, I went down to the river. And this is what I saw: 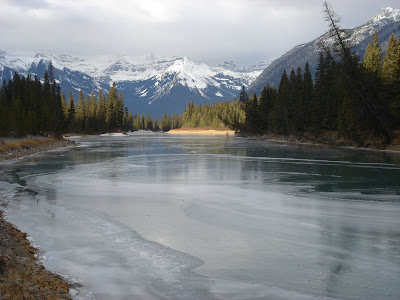 It was frozen to glass like perfection and it was crystal clear. While I was looking at the ice pondering how smart it was to attempt skating down a frozen river, I was joined by another brave soul Ryan and an older couple named Melissa and Carl. We laced up our skates and together, ventured out onto the ice. We could see that the depth of ice was around 5 inches! It was that clear. It was still unnverving because we could also see the bottom of the river with such clarity we could see all of the deadfall, rocks and fish under the moving water. It was scary, but safe, but scary. Together, laughing, smiling and visiting, we skated almost 2km right down the river and it was one of the more amazing things I have done since I moved to Banff 4 years ago. I had a true Banff moment when we were standing on the ice socializing with the old timers, who were telling Ryan and I stories of living in a cabin on Lake Louise in the 1960's. They said that it was really rare and special to be skating on the river and had only done it a few times. It was cool to meet some other Banffites and have a true Banff adventure together.

I was so thrilled and full of adrenalin post-skate (I was nervous and it was scary) that I gathered up my touring gear and headed back up to Sunshine, for another ski and another lap of Sunshine Meadows. I had some nervous energy to work off from the ice skating adventure. 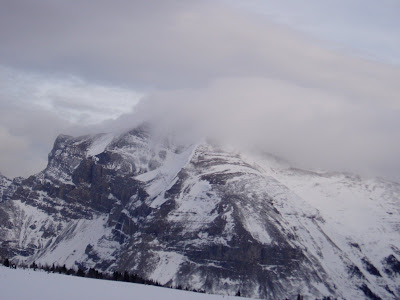 It was sure is great to be ski touring again! Now, I am finally excited for the arrival of winter and ski season. Note to self: when the sky turns this color, it is time to call it a day. 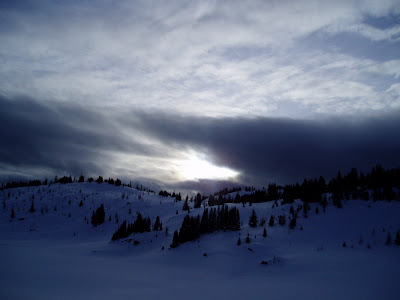 Keith arrived home late on Saturday night and bummer for him, had to skip out on the long run on Sunday. Truthfully, I wasn't really feeling like going out by myself so I decided to stay close to home. I ran out the back door, hit the trail and ran straight up. 7.5km's later, I was on top of Sulphur Mountain!! I did the old up and over-up the front side and down the back side. I forgot what a huge descent this is - from the top of the mountain all the way to the valley floor it's 8km and change. I was sure glad I went, it was one of those days where it felt like a tour of duty, but ended up being a pleasure. 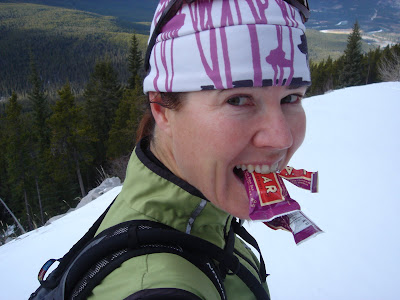 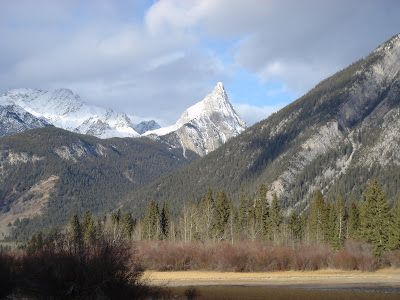 Mount Edith and Corey Pass in the Distance 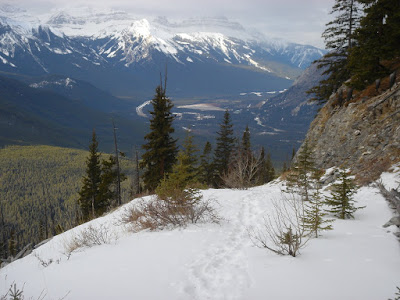 6. Spend some quality time with some old friends.

As a grand finalee, to a most excellent weekend I met up with my friends Dave and Brenda for an afternoon skate. We had heard of another local area that had frozen perfectly and wanted to check it out. When we arrived at said "secret skating place" there was tons of families from Canmore and Banff enjoying their day. The views of Cascade were gorgeous and the ice was pretty darn perfect!! 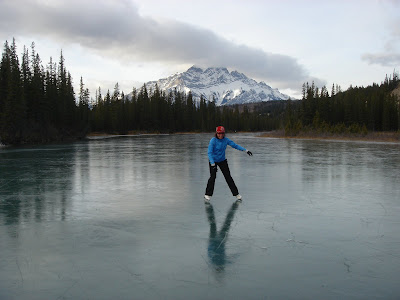 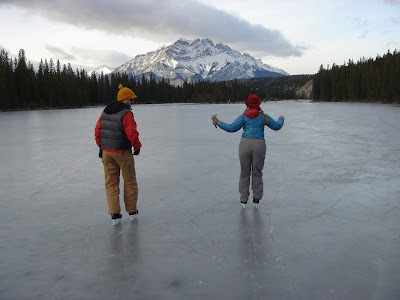 Dave is an Ass Man 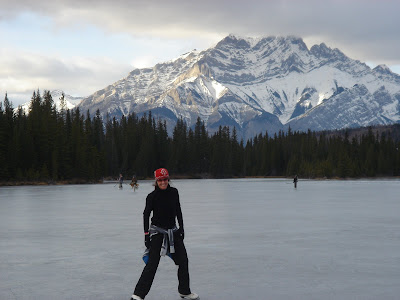 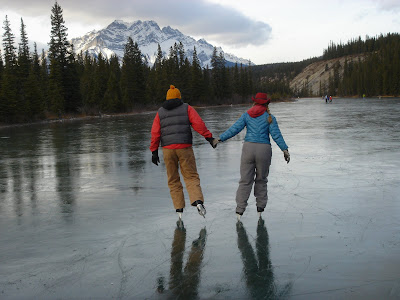 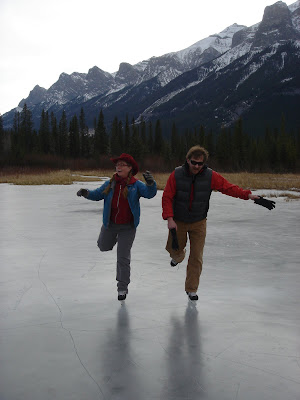 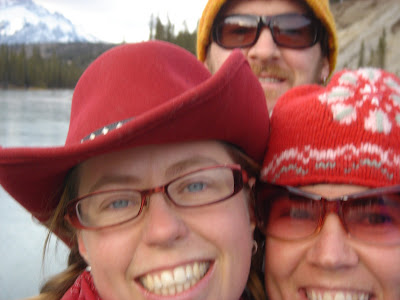 In summary, that is how you maximize a weekend:)

phew! You just exhausted me...and I want SNOW, too!

Leslie, you put the Energizer Bunny to shame. Nobody could possibly cram more into one weekend than you.
Good job!
Just looked out the window, skating is done, skiing is on!

Thanks again so much!!! I'm glad you were able to ski. The snow looks so pretty. I ran this morning at 5:45 a.m. and it was in the mid 40s. I don't know if we'll ever get snow! Your burger description makes me want one :-)

Just letting you know that yes, leslie does work, is not free ALL the time, and can't play every minute of every day...as it seems she does in her posts...she is now hard at work giving our lovely Banff visitors information at the tourist centre...and I plan to 'rub it in' when I get back from a great day of snowshoeing. (I had to work all weekend while she was doing all those "activities")...but now, the snow is here, and it's time to play!

Maximize indeed! I thought the way to do that was to run 3 in 3! I would love to see the river frozen like that - it must have been amazing! I get the scary part though...

That is fabulous!
If I lived in Canada, I'd own several pairs of skates. Skating on a big frozen river would be awesome! It was so glassy!
Great photos.

Those pics with Dave and B are pretty adorable!

Thanks for the lovely visit. I love Leslie! (and Keith - of COURSE)

Ok I KNOW i am not keeping track and always a bit late with my posts - but seriously i should stop reading your posts NOW!!!! All this pictures frome the shine just want me to hop on the next plane and come over!!!

I really need to work on my schedule for feb to get some skiing in with you guys! :)

Hope all is well!!
hugs
Anna

Hi Dave and Mike,
Don't mean to tire you out boys!! Yaaaaay, for the arrival of the snow!

Danni!
Why hello daaaarling! That was FUN. We'll do it again. I think this weekend there is another burger on the agenda, so I think I will have it in your honor!

Michelle and Jeffo-
The frozen river was the coolest skate to date, VERY special :)

Miss H,
So great to have you up this week!

Hi Anna!
I always enjoy hearing from you! It was a late start to the season, but we finally got some snow this week! Make it happen in February!

Hi Sarah Elaine-
Hope your still getting out for lots of good runs and working on that transition from road to trail for next season!! :)

....sharing, everyone! I look forward to your "comments" every day! And for those of you "Blurking" out there, when am I going to here from you??

Okay, I've been blurking. I love your blog, and this post was especially fantastic. You made me want to pick up, move to Banff, and make friends with you!!!

Skating on those lakes looks like a one in a lifetime experience!

Hi Sonya! THANKS! ...and good to meet you! Yes, life is good in Banff and I love to share my special place! Congrats on a wicked 50k debut on a tough course, what do you think after you've had some time to digest your achievement??