I woke up on Sunday morning, confused and groggy. I had the best night's sleep and was startled by the golden orb outside my window. What is that golden orb in the sky? After days of grey and rainy, yay for sunshine! We had a couple of friends from Calgary come and stay with us last night and on this morning, we slept in and then went out for some exercise! The boys went for a road bike and the girls went for - what else - a run! My friend Stephanie has lost some weight, is looking fit and healthy, is damn entertaining and is running strong!
We went out for an hour on the Leslie Backyard Tour. The most scenic trails within 30 minutes of the back door. We ran past the spot where the elk had me pinned and gave my 3 trees a little thank-you-pat! However, I forgot the camera on the AM run, so I'll have to settle for the memories....
We whipped up a big lunch and had COFFEE after realizing that Keith had accidently brewed up DECAF for breakfast. We all wondered why we were feeling so mellow and sleeeeeeepy!

After the coffee and the huge plate of pasta kicked-in, we said good-bye to the friends and I decided to go for a bonus run. A big bonus run! Keith was off to Canmore to go to a Show and Shine Car Show, so I thought I could get a lift and run home. There is a fantastic trail that runs between the Bow River and along the base of Mount Rundle, all the way to Banff called the Rundle Riverside Trail. I haven't been on this trail in about 8 years and the last time was on a very long and traumatic mountain bike ride. I think it was about 18 km's back to my house point to point.
You start at the Canmore Nordic Centre and you finish at the far corner of the Banff Springs Golf Course. The Rundle Riverside trail is a popular mountain bike trail and a pretty popular trail if you are a bear moving through the Bow Valley. For some reason today, my spider senses were tingling and for most of the run, I had Bearanoia.
Bear-anoia!
Yes, it's like paranoia, but different. I get it occasionally when I run through the dark woods by myself and today, I had it bad! Maybe is was because I saw 3 black bears from the car on Friday and did I mention, 3 grizzly bears and one blond black bear from the car on Saturday? Or maybe it was all of the scat? Or was it that the only cyclists I ran into had seen a couple of bears only one hour earlier? Either way, this girl was running through the woods irrationally scared to the point of Bearanoia. But apart from that...it was a sweeeet run! 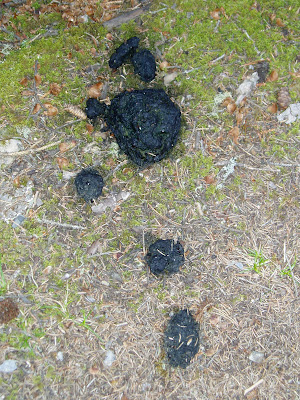 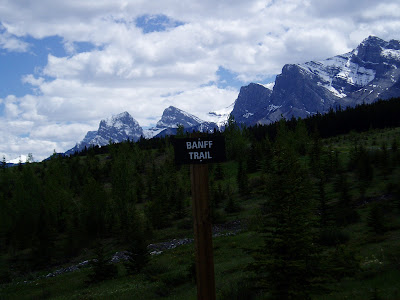 Banff is that way!
Heading out on from the Nordic Centre, on the Banff Trail, I could not believe the fantastic job they have done revamping the trails! The Nordic Centre is in the business of producing some future Olympians and they have been upgrading the facility for the last two years. When I started out, I headed out on an asphalt trail that was for roller-skiing. There were lots of young athletes gliding through the forest, it just seemed so weird! Roller skiiers in the forest in the mountains? Bizarre. After that, the only people I saw were the 3 cyclists who had seen two black bears. 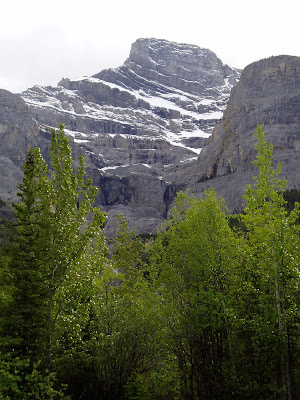 She'll be comin' round the mountain - Mount Rundle

The trail was in fantastic shape! Everything was a shade of "new leaf green", the trail was dry, the pine needles on the forest floor were soft and squishy underfoot, but the roots made you pay attention! It was dark in the forest and with my Bearanoia growing, I was glad to finally come out into the open and was rewarded with some great views of all the classic Banff landmarks! 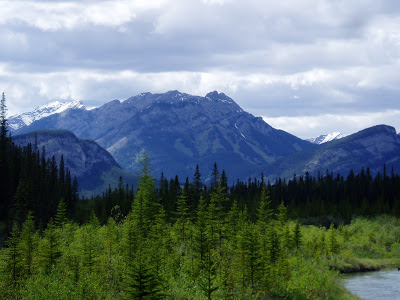 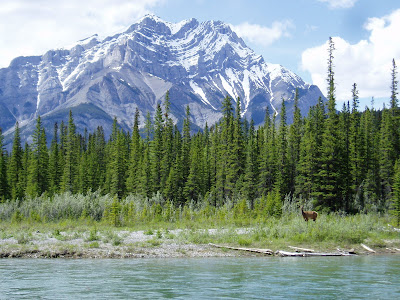 Helllllo Elk! You can't bitch stomp me on that side of the river.... 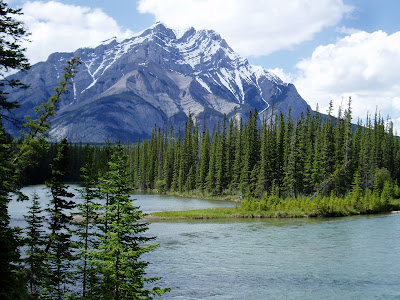 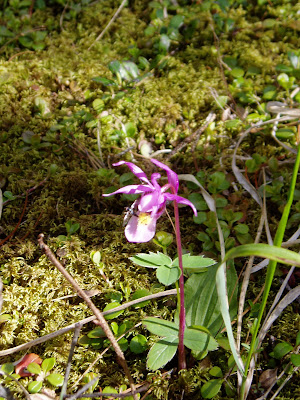 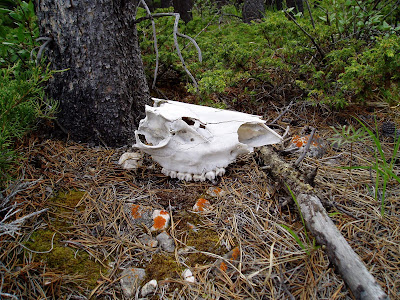 By the way bearnoia is the perfect word for those quasi-irrational fears that crop up from time to time. Man, I'm adopting that word fursures...

How do you deal with your bearanoia? One of the biggest reasons I haven't moved to the Rockies yet is that I'm bigcataphobic. When it kicks in, I literally have to turn around or otherwise find the least paranoid prone route. Other days, I could run on otherwise scarier trails and be fine!

I'd be seriously sufferin' the bearinoia. I get mountaincatanoia out here sometimes.

And, the good news is that the dead thingy wasn't you!

Dont you know the golden rule of surviving bears? You have to run with someone slower than you - someone to keep the bear happy while you scat ;)

And Trail Goat - of course you're scared of the cats...they like goats!

PS. Dont encourage Jo on our blog to "find some hills"...as it is she's driving me mad (and ragged!)

Meghan-you've never heard the term Bearanoia before? How about a Bearjam? (traffic jam due to bears on the road side)...both are rampant these days! On Saturday, we saw quite the sight:
1 Mama Grizz and her 2 adult cubs RUNNING scared at full speed just beside the highway. Wowzerz.

Yeah, I tells it how it is!

Funny you should mention big cats. The latest drama in our neighborhood was that there was a cougar kill at the end of our cul-de-sac. Just 30 feet into the bush! Crazy!

The only cougars I ever see are the ones that come to town trolling for young meat on the weekends and they are a waaaaaay different breed.

Nya-I never have bigcataphobia because for starters, I have never seen one though I know they are out there...also, I figure if I big cat wants me, I won't know what hit me. It'll be game over very quick!

How to deal with bearanoia? Run with friends! Also,I made so much noise out there on Saturday I almost lost my voice and OH! I ran a lot faster than usual....

Most of the time I am relaxed and O.K, but sometimes depending on where I am, it creeps up on me. Sometimes, I sing Las Vegas showtunes to make me feel better and that always works.

Hey Sat and Trail Goat....I think you may be seeing me in August! You'll have to stay tuned to find out!

Sat,
I can't say I blame the cougars... jerked goat was quite tasty... back when I ate meat.

Sunshine,
If the cougar kill happened in my 'hood, I would never leave the house again. I'd have to work at home and order pizza in all the time or something. I'd get me a snazzy treadmill and look at the window longingly. I've seen a wild cougar ... from a car, mind you... and it was the most incredible animal I've ever seen. It shot up a cut away bank on the uphill side of a road and then rocketed out of sight. You're right when you said you'd never know what hit you - that's why I want to get me some metal neck armor and a helmet. ;-)

I hope you make it down the Rockies to Colorado in August. That would be exciting!

Bearnoia is a perfect way to phrase that fear. I often suffer from cougernoia myself (which I apparently share with others :) ).

Still, for trails like that, maybe a little (ir)rational fear is an okay thing?

So it looks like I'm not alone out there!

Bearanoia...bigcataphobia...is definitely, a "normal" phenomena! You just got to make sure it doesn't drift too much in to your mind, as to diminish the pleasure of your run!! That is the challenge!!