After sitting in a car for 6+ hours the day before, I had a little energy to burn and needed to get out and run, run, RUN!

I had decided earlier in the week that I wanted to do something a little different and came up with the idea of a Bike and Hike. My friend Steven promptly replied that he "doesn't hike" so I had to rename the event a Run and Ride if I was going to recruit any friends at all. Either way, I was excited all week about going up into Yoho National Park for the day to see just how much snow is still out there!
The plan was to ride our bikes up the Takakkaw Falls access road, which is still closed for one more week before opening for the summer season. Then, we would go for a run and enjoy some Yoho trails, with the once-in-a-season luxury of being the only people on the trail! I had thought that our trail run might be limited to the Little Yoho Valley trail, because of the possibility of deep snow.
The ride was only 12 km and it was fun to ride our bikes all the way to the base of Takakkaw Falls! Usually, this exact spot will receive 100's if not 1000's of visitors every day in summer. We just rode our bikes straight up the pedestrian pathway and got to be some of the first visitors of the year!! I was giggling thinking of all the people that are usually on this path as I road my bike. 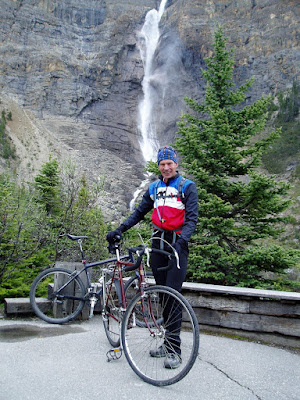 Miles, The Bikes and Takakkaw Falls!! 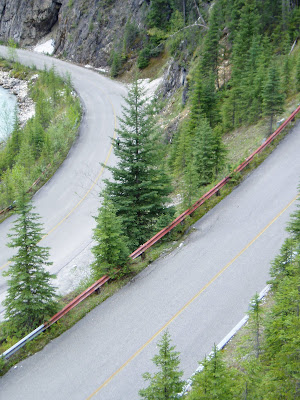 The road ride was a pleasure. We could hop off our bikes to check out the views and take joy in riding on the wrong side of the road! There were massive mounds of Grizzly Bear shit to slalom through. The road has been closed since September, so if a bear shat on the road way back in September its' scat was still around for us to enjoy on this June day!

There was a LOT of bear shit. We laughed at the idea of possibly having a bike crash because of a bear-shit-skid. Sorry, no photos of the massive dumps that Grizzlies take. Maybe it was Sasquatch shit??

We also saw a lot of marmots! Big, fat marmots with their high pitched whistles. We had definitely disturbed their little Marmot world that had been quiet for the last few months. They weren't shy either..... 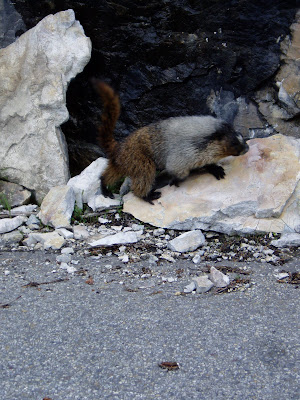 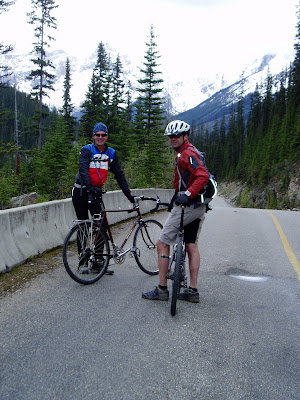 The bike ride didn't take long and we soon ditched the bikes to enjoy the great trail up the Little Yoho Valley. The river was raging and soon I had christened the run/ride: "Le Tour de Water Falls." When we passed the first sign to Point Lace Falls, the boys looked at me funny when we sailed past the turn-off. I told them, "Don't worry, there will be other water falls!" and there were! Case in point - Mike and Miles checking out an un-named falls: 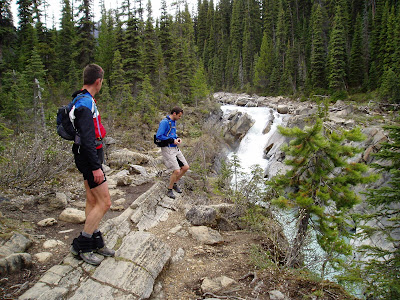 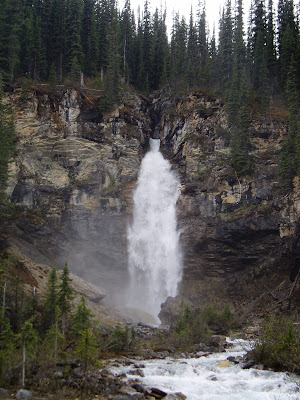 After enjoying some cruisy single track with great river views, the trail jumped back into the forest and began climbing towards Yoho Glacier. This time last year, the snow was quite deep in this forest section and I had to deal with some serious post-holing and mud. This time, we just had a few snow patches and some winter deadfall. No problemo! 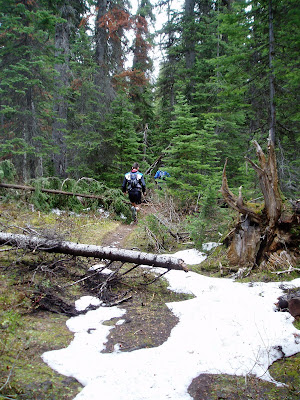 When you pop out of the forest, this is the view that greets you! Some fantastic high alpine glacier geology, with the layers of rocks sort of looking like an ocean frozen in time. I don't know anything about glaciology and geology, but this place certainly feels ancient and is beautiful. 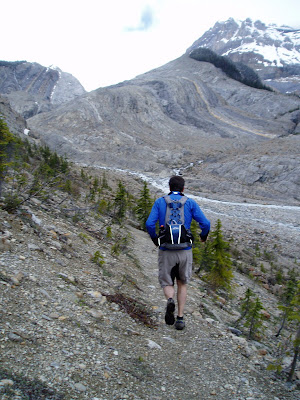 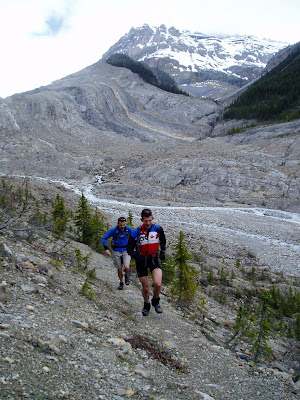 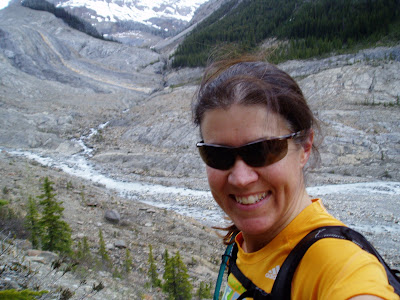 The out and back towards Yoho Glacier is awesome.....but you don't get to see the Glacier! You have to climb higher up towards the Iceline Trail to see it in all its' glory. We will have to save that one for a later day in summer once the snow melts. Anyhow, after visiting Yoho Glacier I realized that a longer trip was going to be possible because the snowpack that I was expecting, just wasn't there! Yay! We got to enjoy the trail up to Twin Falls and the Twin Falls Chalet, before returning on the Marpole Connector, through an un-named boulder field. Fun-fun-fun. 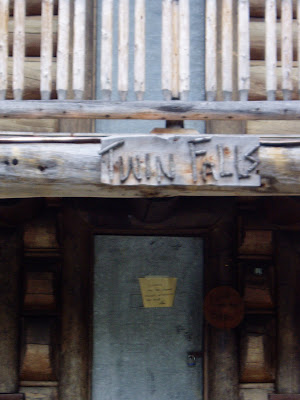 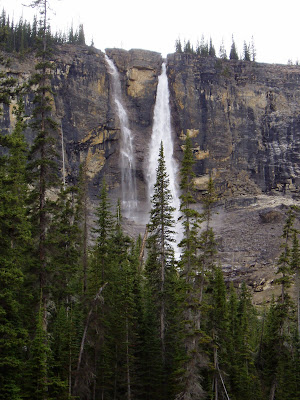 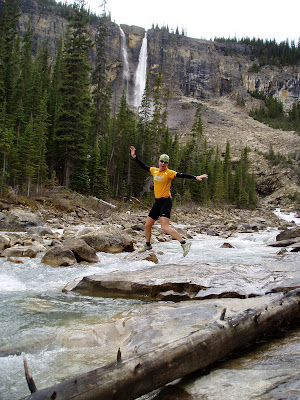 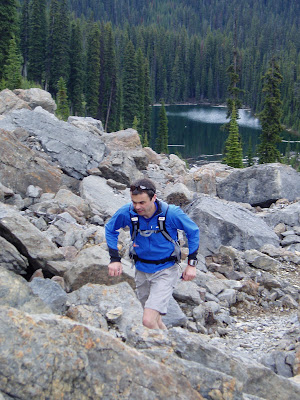 In the end we ended up running a fantastic 26km and having a great day. No rain, no post-holing and no bears! Wooohooo! I can't wait until next weekend, the campground at Takakkaw Falls is opening and I plan on being there for summer solistice!

Riding/running while the road is closed is delightful. I love the rare occasions where we get to do that. Beautiful scenery, and from the previous post, lovely names for developments.

So I guess a bear doesn't always shit in the woods - sometimes it's the road? Glad you didn't skid in any of it, though that would have made a good photo.

Your "Goofball" photo is really cool! It gives the illusion that you are about to get very wet. That looks like a keeper to be printed, framed, and placed on the personal shrine wall.

Did you see any bear bells in the large piles of bear poop?

Why it's the Washington Fan Club!! It was cool to know we were some of the first people to be on those trails this year. Wait...and last year, and the year before that...

Thanks for a great day out Leslie!
That was the perfect combo and it was cool having the whole of Yoho to ourselves.
I will be very bitter next time when there are other people using my trails :)
Love the photo of Mr. Marmot, I'm so glad we didn't run any of them over...