How to Clear Your Head

I awoke this morning a wee bit foggy after a fun night of yummy greek food and two bottles of vino blanco shared between friends.

So THE thing to clear ones head after a night of overindulgence....awake early, put on the trail runners and hit the trail and RUN!!! I went out for an hour and a half around Tunnel Mountain and saw nobody! Tunnel Mountain sits right in the middle of the Bow Valley, it is sort of a large hill in contrast to the surrounding peaks. But there are great trails that go up it or all the way around it. That is what I did today....I circumnavigated a mountain! How cool is that?? Around the back side of the mountain beside the river I ran into a herd of elk. There must of been close to 50 animals, mostly females. They were on the other side of the river fortunately so I got a good look. They didn't pay me much attention. Definately the highlight of the day.

Here is a picture of Tunnel Mountain.....it is also known as Sleeping Buffalo. When you catch it at the right angle it looks just like a giant slumbering buffalo.
It is the mini-mountain in the middle of the picture! 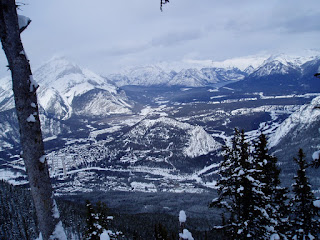