Smile if You're Happy.

Meet Jill.
She's from Alaska. She's going to bicycle to Mexico, along with a few dozen other like-minded folk in this year's edition of the Tour Divide. Tour Divide is a solo, self-supported mountain bike race on all 2,745 miles of the epic Great Divide MTB Route. It starts in Banff and finishes at the Mexican border. I love this photo. She looks decidedly happy. 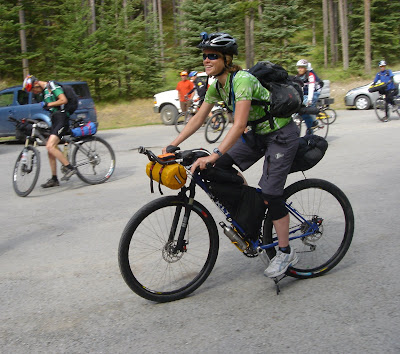 At the startline, there were 40+ athletes of all nationalities, shapes and abilities ready to take on the challenge. The sense of excitement in the air was contagious. And they all seemed pretty darn happy considering the challenge that was at hand. 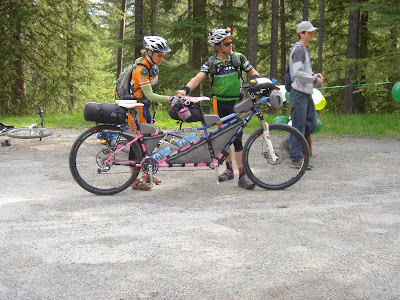 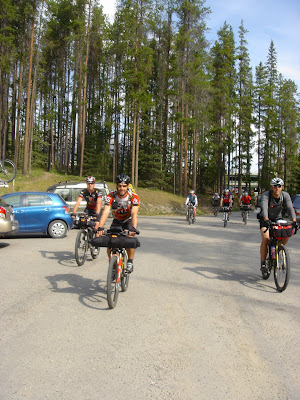 A Banff local, Crazy Larry had come down and decorated the "unofficial" startline. Larry is one crazy Mo-Fo, but he was down there smilin' like the crazed fool that he is. 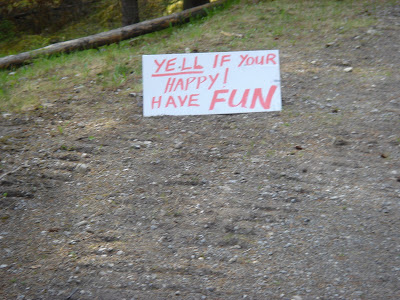 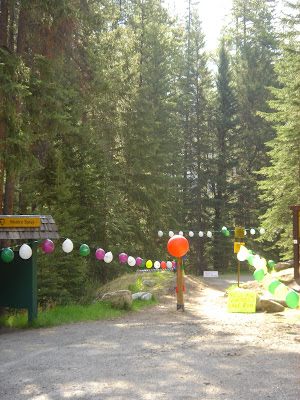 A few days prior, Jill turned up on our doorstep. She was hoping to relax and chill out for a few days before setting off on the Tour Divide. We took her on the tandem for a Town Tour and enjoyed a beautiful evening in Banff. 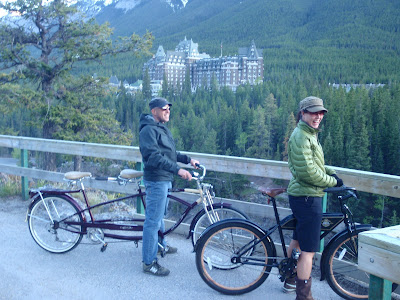 The next evening, I took her for a walk to Lake Louise, the Little Beehive and Lake Agnes. In retrospect, this probably wasn't such a smart idea given that Jill has to ride 2,745 miles and the trail looked like this: 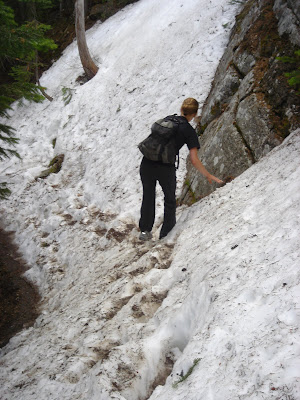 Inwardly, I was cringing that she was going to have an accident and break herself and I would be the one responsible for injuring Jill of Alaska. But instead, Lake Louise and Lake Agnes worked their magic and we found ourselves relaxed and rejuvenated. 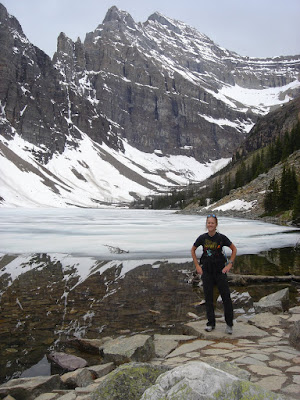 We were both smiling like Crazy Larry by the end of the night. 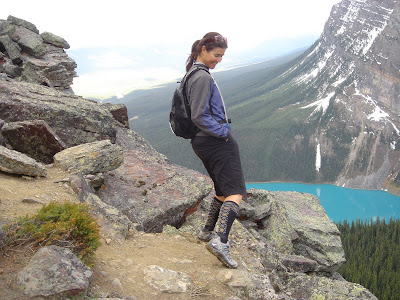 May your body, mind and bicycle carry you on a great adventue wherever that may be.

Good luck Jill! That picture of her walking across the snow field is why I bought crampons. I get really scared. She's doing what I do -- grab the snow above but then your hands get cold. Oh the horror!

OMG Crazy Larry was out, hahaha, priceless!! Does he still wear his backpack full of gear like he just got back from a seven day mtn trek? I remember way back when I was an extra on that Cuba Gooding Jr. movie, 'snowdogs' I think, and it was shot in Canmore. Crazy Larry totally crashed the shoot and they let him in on a few scenes, soooo good!
GR

2,745 miles across a Rocky Divide? All I can think of is how much my ass would hurt (that's arse for those o you who are a "little behind" on your English).

Best of luck and good times to Jill! That sounds like a cool and epic journey.

You must post a picture of this Crazy Larry dude.

Yep, some things in Banff don't change. The mountains, the drink specials and Crazy Larry. He ALWAYS looks like he is going on expedition and talks about everything and NOTHING!

That is awesome that you had a fun time with Jill. She is super cool. What a small world. Also love the pics!!

As always great pics, still so much snow you have.

Hello There. I discovered your blog the usage of msn. This is a really neatly written article.
I'll be sure to bookmark it and return to learn extra of your
helpful information. Thank you for the post. I will definitely comeback.

Good post but I was wondering if you could write a litte more on this subject? I’d be very thankful if you could elaborate a little bit further. Appreciate it..!
instagram viewer