First Snowy Run AND A Run in the Sun

Yes, it's that time of year where you just don't know what will be out on the trail to greet you. Our run on Friday was a prime example! There was just a little bit of snow on the mountains out my front window, so we thought we would sneak out to Lake Louise for one last pretty fall run. My friend Alana came up from Calgary for our little run and fortunately, she is always up for an adventure! As we were running out the door, we decided maybe we should both stick our Yak Trax in our packs, just in case.

Well. We were quite surprised when the snow started to accumulate on the side of the highway and when we rolled into the parking lot at Lake Louise, there was probably 10cm on the ground and we hadn't even started our climb yet!! The trail was totally runnable, but of course, as we climbed it got deeper. Still, the trail was lots of snowy fun and beautiful - just the views were a little obscured as it continued to rain and snow. 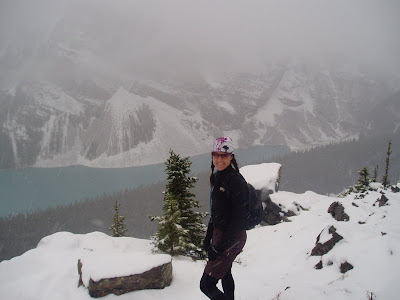 Because it was the first snowy run of the year, we marvelled at the insulating quality of the snow, how snow makes everything so quiet and enjoyed the extra cush under (wet) foot. We also couldn't believe how wintery it was out there! When we got up to Mirror Lake, it was frozen. At the top of the Little Beehive, it was getting deep! We cruised around Lake Agnes and I couldn't believe how different it looked from a few weeks ago. 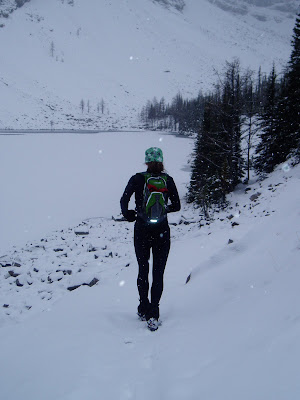 Alana rocking the shoreline trail of Lake Agnes
On the top of Big Beehive, we couldn't see a damn thing but we got a few glimpses of Lake Louise from above. On the climb to Plains of Six Glaciers, we never did get a glimpse of the magnificent Victoria Glacier. We didn't really care, we were having fun trudging through the slush and the snow, which was rapidly getting deeper. We made it to the top of the Plains of Six Viewpoint which was the end of the line - knee deep snow and the trail disappearing into an abyss of swirling white. 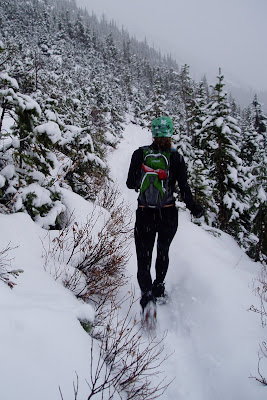 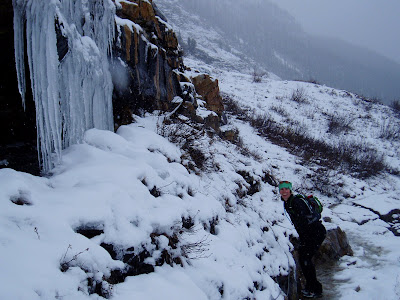 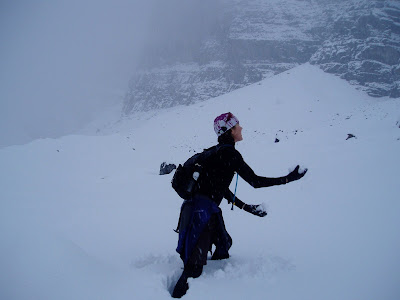 End of the Line - Let's Juggle.

The decent down was fast and fun and I sure was glad I through those Yaks in my pack. It would have been treacherous without them! Instead, we ran down with confidence and were back on the lakeshore in a flash. I suspect the next time I see Lake Louise it will be a shade of snowy white, not that brilliant milky turquoise color! 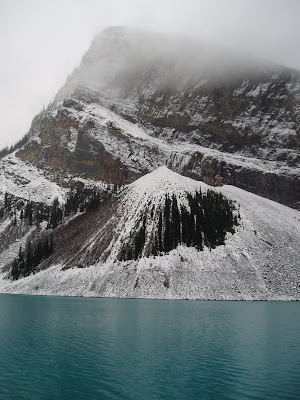 More photos of the first snowy run of the year are here.

Today, we decided to stay closer to home for our run and run some of my favorite local trails. The snow that fell in Lake Louise, fell as rain here, so we didn't have to worry about any snow blocking our path. On the contrary, the temperatures were cool, but we got to enjoy a run in the sun! 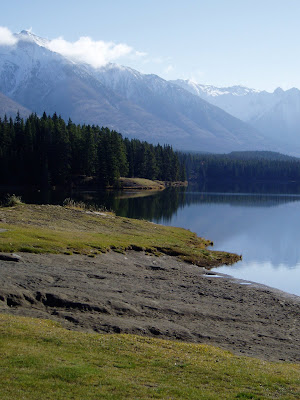 We started at Cascade Ponds and found some beautiful single track through the forest to connect up and around Johnson Lake, the Two Jack Campground and ended up at Lower Bankhead. 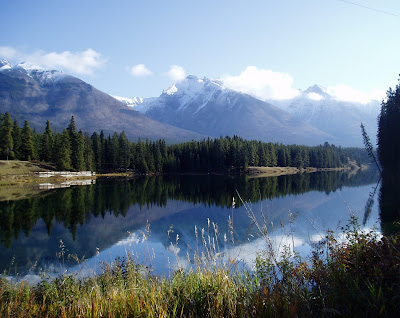 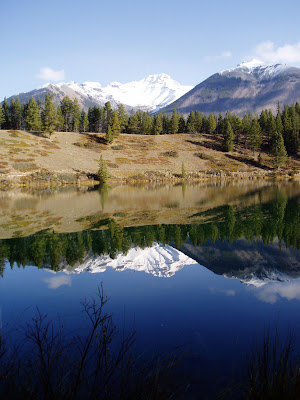 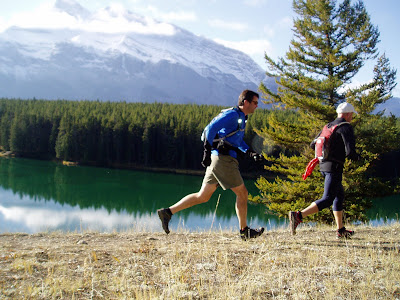 We dawdled by Johnson Lake because it was so pretty and calm. And of course, we had to stop at the swing!! 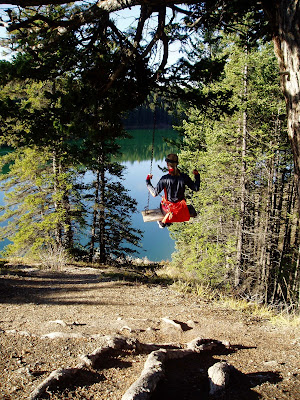 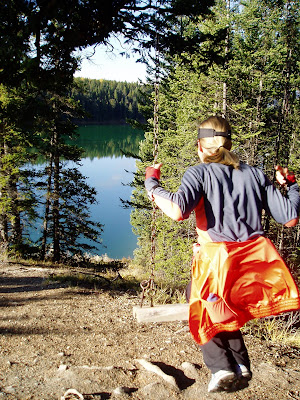 Ollie and I did a bonus loop up to Upper Bankhead and the Lake Minnewanka lookout. Yup, it was worth the run up the hill. 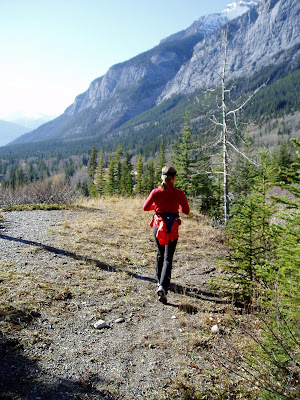 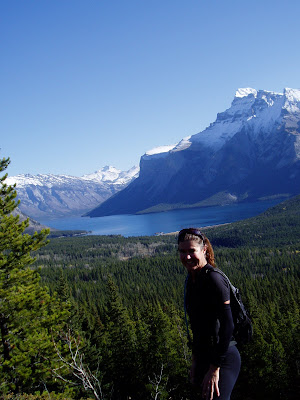 The reality is that it is time for the snow to fly. Any bonus runs we can get in like today, are all icing on the cake of a stellar season of running! I am going to continue to get out for every moment I can on the dry trails before they are all buried for the winter.

Photos from this run here.
Posted by Leslie at 2:48 PM

I'm sitting here, sipping tea, listening to the rain pound down. There are still leaves on the trees, though they are beginning to fall. And it amazes me that where I ran just a few months ago is now covered in snow! I think that's why I don't live where you live...snow in October. Maybe I could summer in Banff and winter in Puyallup. That would work!

Your pictures are so amazing. Do you just switch to skiing once the trails are totally covered with deep snow?

hey Leslie,
roughly where were you when you took the pictures of the 'icicles, frozen, and popsicle'?
i know most of the ice up there, but these don't look familiar (even in incomplete state).
thanks
ian

Leslie switches to skis only once I pin her down and pry the frozen runners off her feet! C'mon up and we'll take you ski touring on these slopes anytime. (She tells me you're no too far from us...Montana?)

Yup I'm in NW Montana (Kalispell). I'm a midwesterner (moved here from Chicago) and am pretty pathetic on skis. I'm learning skate skiing though and just bought an Alpine setup at the ski swap - I want to put tele bindings (or whatever one uses) on my skis though so I can do touring.

And I definitely want to get up there!

Oh yeah, I am amazed as well! That's it for dry trails up there, we could be Cross Country skiing on the Moraine Lake Road as soon as a couple weeks??

Hiya Danni!
I have too many skis. Downhill. Cross Country Classic. Skate skis. Alpine Touring Gear. As a result, I seem to be mediocre at all of them! O.K - except the downhill, that I can do with my eyes closed at high speeds!! I run through every winter, just like you did last year. I even manage to avoid the roads and stay on the trails! Keith and I have a little race coming up in November, but after that we will be keen to ski.

Hi Ian-
There were lots of great frozen ice flows on the trail to Plains of Six Glaciers! That's where the photos are from. It is a neat time of year to go up when everything is freezing and of course in a month, you probably won't be able to go up because of avalanche conditions.

Great photos. How do you get the water to stand still? I can't remember the last time I saw water that glassy still - uh, not counting frozen. I might actually have to visit the North sometime.

I miss you! Are you coming to visit soon! Pretty please!

Yippee I got on the Internets to see what's happening in your life, and it's amazing over here. Holy crap look at all the snow! I'm truly amazed. Um, it was 85 at my house this afternoon. :)

I hope you two are doing well!
Meghan

Hi Leslie - awesome run! Fabulous pics ! I love running in snow - just hanging out for the white mountains - we rarely get as much as you guys anymore tho....:-(

Your picture is not good. my sites http://scientificfasting.blogspot.com