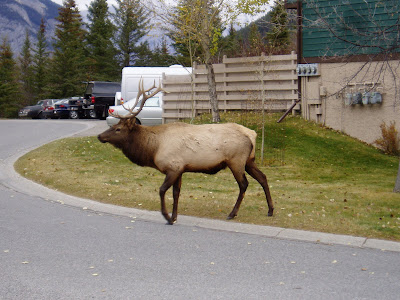 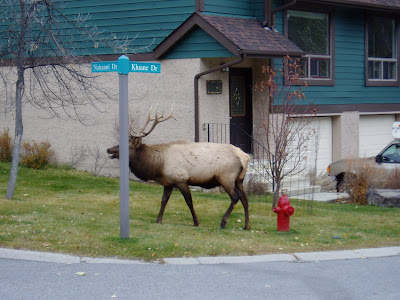 Kluane Drive - Out the front window

Exciting story. I've put a link to it on my site Digital Banff.

I'm glad you made it out in one piece Leslie. I can only imagine you sprinting up Sulphur in record time after that :)
It's good to know that bear spray will work on elk too in a worst case scenario.

Jeez, that's rough. She'll be fine, though, with the bear spray. It's probably like when we get soap in our eyes. Thank goodness it got you out alive! If only she knew what a sweet girl you are, she would have introduced you to her calf!

On a funnier note, check out this blog (the streakers post). Cracks me up. http://garyrobbins.blogspot.com/

quick thinking Leslie.
I wonder if a bear-banger would have worked?

Oh Leslie.
Even though i am in Germany you still manage to make me laugh over your stories!
I am glad you didn't get hurt by the elk!
Was it already Anna (Collins for that matter) and stues wedding?

I guess I should call SOON!
Anna

Oh and i have to say hi from dad as well. he still thinks about coming over for 3 days to hike up cascade with Keith

OK, first I'm so glad you didn't get stomped into little Leslie pieces on the ground. I'm all hyped up on adrenaline after just reading your story! Nice that you had your wits about you to finally remember the bear spray. Your only other real alternative would have been to go MAD MONKEY on the bitch.

Whew! I mean sheeeeit! I think I may have terminated the run and gone for a cold beerski to allow myself to process the whole event.

I guess I should stop leaving the bear spray on my cabinet at home. Thanks for reminding us that when you run in the great outdoors you will encounter wildlife along the way.

Maybe Mittens is hanging out because it's his girlfriend hiding in the woods and chasing you. He wants to be near her, but her hormones are raging right now, so he's scared. He figures he'll hang out with you because you've shared his experience of a Mommy Elk gone berserk-o!

And, you know what else I thought? If it had been a bear, would you have thought of the bear spray in time? I want you to run with the thought "bear-spray, bear-spray, bear-spray" keeping time to your footsteps. That way, you won't forget. (No need to thank me for my mothering behavior, it comes naturally)

Hey Leslie, Glad to see you dragged Keith out on the trails at Nipika - Is he hooked on running yet? It's funny how we think that elk, deer and moose are more of a distraction and annoyance because they stand 'in our way' during our runs; We often forget that they are still very wild and can turn on us in an instant. Even more of a reason to carry bear spray!
pv

Wowow! So glad you are alright. You did the right thing; she should have recovered from the bear spray within an hour or so. I'll bet you're right about you passing right by her baby, though. People are being charged around here all the time, but nothing bad has happened yet. Problem is, the cows come into the developed area to calve because it's protection from predators. Probably the same thing is happening there, too. Thanks for telling your story and, again, I'm glad you're fine!

Good grief Leslie, that is totally bonkers. Thank goodness you are so diligent with carrying bear spray! Maybe you should get a leash for Mittens and bring him around to protect you?

Hi Mike, Deanna and Ian! Phew! Nothing like a little excitement in one's day! I did ponder going home, but why waste that adrenaline rush??

Bear spray is nasty beyond words and very effective. As well as blinding you, it makes your whole respiratory system freak-out. You cough, your throat burns, you can't speak. I can't imagine that Bear bangers would have done a darn thing: she wasn't responding to noise! She was fixated and would have stayed there all afternoon!

Hello lovely German Anna!
Yes, it was the OTHER lovely British Anna's wedding day. Fun was had!
Hugs to you and your dad!

Eric-
Mmmmm, elk steaks. I'd be a lousy vegetarian.
I think you have gone Mad Monkey. You're speakin' some crazy monkey lingo, but Monkey speak does tend to scare 'em off....hmmmm.

Holly and Michelle-
I saw Mittens with a boner the other day and that was even scarier than his she-bitch!!

Phil-
Hi! Hope you enjoyed your day, you speedy, speedster.

Everybody-
'tis the season so....
Carry that spray and go take a practice shot with it (with the wind, o.k??)

OMG! Leslie, this story had me riveted!

That had to have been super scary at the time but you obviously handled it like a trouper...now you have an awesome story to tell!

I love Elkvision. I wish we had it here. The closest I get are my own cats and the local squirrels.

OMIGAWD!!! That had me on the edge of my seat. Elkvision, however, sounds really cool. We just get birds, cats and squirrels. I did see an eagle being harassed by a crow the other day while enjoying the one little ray of sun we've had in the last month (don't ask a PNW'er how the weather is...)

I just read this because did google search. I was out with horse and dogs yesterday and was charged/stalked by 13 elk! It was surreal. I thought they were docile, I was wrong. I went by after they left and got caught in field because they came back! Only way through was around the area they were congregating. I walked my horse and dogs and they started coming towards us. My dogs were barking and I was yelling to get back. Then Miss Nicky (my mare) decided enough was enough and she got all upset and kind of charged/snorted towards large elk that was coming to screw with us. THe elk got the message and backed off and we skidadled by. I was in total shock! I had no idea!!!

Melissa B in Eugene, Oregon