The Alarm Dog and Elk

The past few weeks have been a bit of a blur - but one thing is for certain: Spring is finally here!! YAAAY!! Hooray for Spring! It was a long time coming, but one week post storm - my
front lawn looked like this: 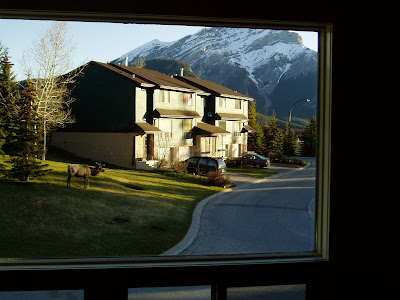 See the difference?? This time last week....white, white and white. This week, all of a sudden it is green!! And yes, that is a large ungulate on my front lawn. I love that word, ungulate. It makes me giggle and I'm not sure why. As soon as the snow receeded, underneath it there was fresh green grass waiting to come out and breathe!

As it is with the cycle of things, the snow disappeared which caused the grass grow. The elk have appeared to eat the grass, and now, the Alarm Dog wakes me up at 6:30AM like clock work. He likes to bark at the world and in particular, at the elk which eat the green grass. Got it? 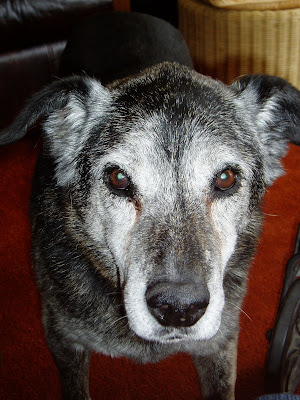 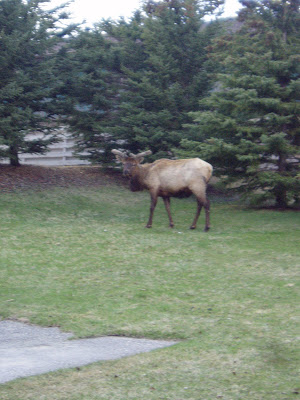 The elk are actually quite adorable this time of year, because they are just growing themselves some fresh antlers. The antlers are short and stubby and you can see the fuzzy velvet on them. In the week that this guy was hanging out, I swear you could see them grow. My question is: Does it hurt to have antlers that grow as fast as you can say "flesh eating disease?" It's got to hurt! That's a whole lot of blood blow going on and I've always wandered if it bugs them. I asked this guy this morning, but he just fertilized the lawn and ignored my silly question. I know when they lose the velvet, it must be irritating as hell because they spend a lot of time rubbing their antlers on trees. Maybe it is itchy. Maybe it tickles. Maybe it feels good! Maybe it hurts.

All of the elk and early morning wake-up calls aside, it was a great week. Banff really did change over the course of the week. The air smells different, the sun has heat to it and I have the urge to spend every living moment outside! I went for a road ride on Monday, a trail run on Wednesday and a road ride on Thursday. I took these photos from my road ride on Monday night last week.....just cruising along on the bike for a short ride around town. 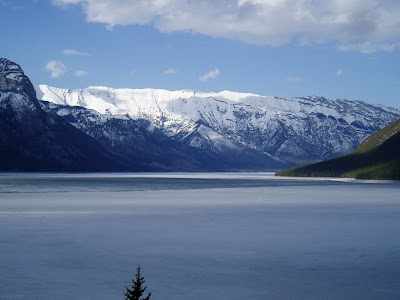 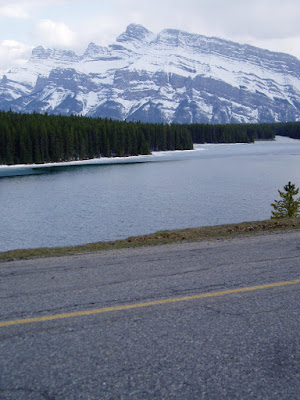 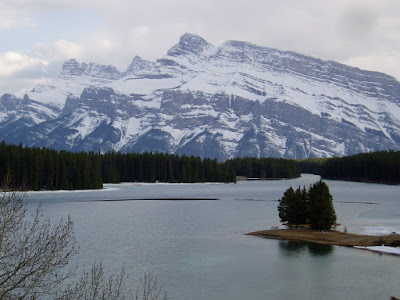 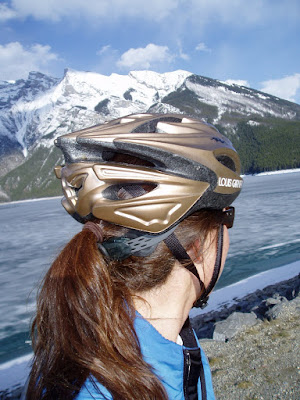 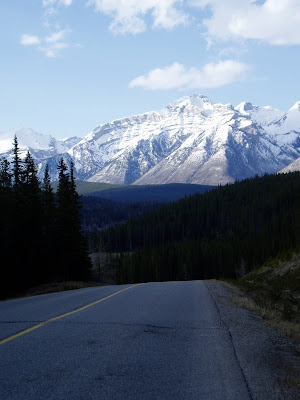 That is some pretty sweeeeeet road riding, yes??? The new bike Keith bought for me is quite divine and I can definitely say: I LOVE MY BIKE!!! It is one smooooooth ride.

On Wednesday night, Mike and I got an easy one hour run in after work and my legs were feeling great! All back to normal - no aches and pains, fresh and great to be out running around in the woods again. Withing the first 30 seconds of our run, a big fat mosquitoe landed on Mike, yet another sign of spring. Mike also appeared to have lost some weight.....yet another sign of spring! There were still remnants of the snow storm to be found in the forest, but mostly the trails down low are clearing up quite nicely.

The weather on Friday was forecast to be hot and sunny and I had planned all week on trying my first long run post-Miwok. I was practically salivating I was so excited to be back running on the trail! It was going to be a perfect day in the mountains. To be continued....

Spectacular shots of my favorite place in the world! Can't wait to get up there this summer! I hope we can see some ungulates when we are there.

And good morning to you! Just wait to you see the pics of Fridays run!

I always get ungulate confused with that doohickey that hangs in the back of our throats...isn't it the uvula? Also, could you make sure the mosquitos are fed before we get there this summer?

Ummm....medulla oblongata? waddle? whatta'?? All I remember from high school biology is the uvula is the one that makes you go: kaaaackh aaak gaaagh

I wrote a little post in tribute to you and the things you forget at my house :)

BY THE WAY - are you doing that little run at Nipika in 2 weeks? I am thinking about signing up for the 1/2 as a little training run and I am looking for cabin mates.

Oh the alarm dog is so cute! But grrr on the early morning wakeups! The elk are all antlering themselves here, too. And, they do look cute, kindsa young and naive-ish. Lovely that spring is finally sprunging there in the north country.

Be well and happy!
Meghan