A Keith and Leslie Adventure: Part 1

For a long time, I've wanted to explore Southern Utah.  I've heard many a story of the glories of Bryce, Zion, Escalante and Canyonlands National Parks.  It was decided that we would do an exploratory trip of this desert Mecca and at the same time dust of the cobwebs of our bicycles.  The idea of a desert bike tour was born.  We knew we wouldn't be able to see it all, but that touring by bicycle would just give us an up-close-and-personal taster tour of this incredible area.  Neither of us had done a bike tour in twenty plus years, but we love the idea of traveling by bicycle.  Let the adventure begin.

We loaded up the minivan and aimed South.  It was an awesome 2 day drive to Hurricane, Utah where we stashed our car and rolled out of town on loaded bicycles. We hit the first coffee shop we came to in Hurricane for cinnamon rolls and coffee and we were off.  It took us the day to get used to riding loaded touring bikes, riding a bike loaded down with gear is slow and feels precarious at best. 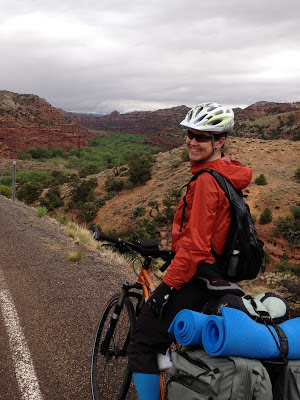 By the time we rolled into the tourist town of Springdale, we were finding our groove and were motivated to just keep riding.  The weather was warming up, we were working up a sweat and we were happy.  Or maybe it was all that coffee.  We had an awesome feast and more coffee before attacking the major climb out of Zion Canyon. 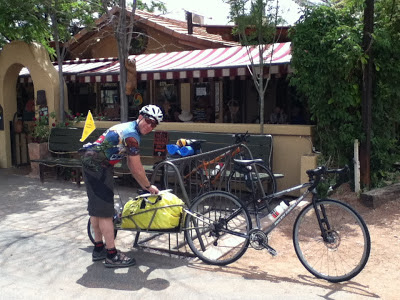 Coffee and Fish Tacos in Springdale!

It featured incredible scenery, hairpin bends, a tunnel (which we had to hitchhike through) and as a grand finalee to Day 1:  a big hail storm where we took shelter under a tree beside the road.  All-in-all we ended up riding across Zion NP to the Easterly border, climbing from 3,248 feet to 8.000 feet in 50 miles.  We camped on the Easterly boundary and gorged ourselves on pizza at the Zion Ranch Campground.  Day 1 was all about food, crazy beautiful scenery and elevation gain.  Pure Awesome. 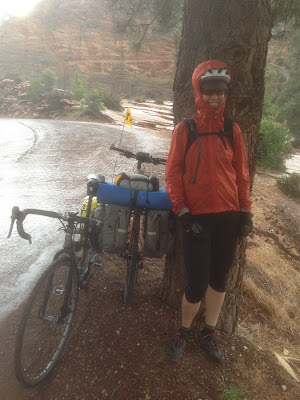 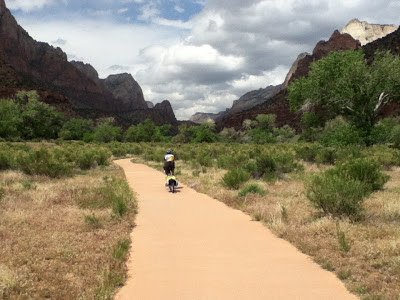 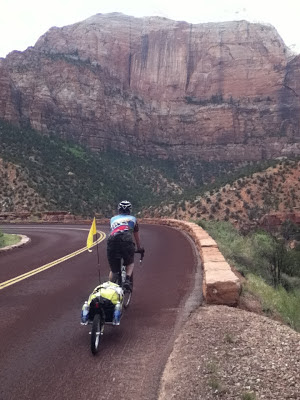 Camping at 8.000 feet is cold, even in the desert.  It rained and hovered around freezing through the night so we slept in until the sun hit our tent before we got rolling.  We hit the Thunderbird Restaurant at Mount Carmel Junction for coffee and Second Breakfast.

At the junction, we picked up Highway 89 and headed North. The X-factor when you are bike touring, is the mystery of the road.  Will there be a shoulder on the highway?  Will it be busy?  Will it be pretty?  Turns out Highway 89 is plenty pretty, but was a double laned busy truck route with no shoulder.  While I enjoyed most of my day, this day also found me being paralysed by fear, with frequent death-gripping of my handlebars and watching my non-chalant husband getting nearly creamed by a semi-truck. Oh, and then there was that mid-afternoon hailstorm.  Fortunately, there was as gas station at the Long Valley Junction with a miriad of microwaveable treats and plenty of bad coffee.  We sat out the storm in luxury and dried out.  We ended up in the thriving metopolis of Hatch, Utah - population 133.  At the campground, we took a bed in their motel for $55.  Our host was a friendly guy with no teeth,  who told us that there was no beer to be found in Hatch, Utah - population 133.  His wife, also with no teeth - kindly did our laundry for free.  The big surprise was the recently renovated luxurious room complete with King Size bed and down duvet. Whoot!

Next morning we rolled out early to tackle my nemesis, Highway 89. It was a short 12 miles to Highway 12, the gateway to Bryce National Park so we decided to blast out those last 12 miles of the dreaded Highway 89 and reward ourselves with breakfast at the junction.  There was fresh snow on the peaks off in the distance and the desert sky was alive with more micro storm systems, black-vicious-coiling clouds threatening in all directions.  We somehow got lucky and managed to dodge the storms all day.  But, we opted to ride right by Bryce because there was an evil storm lingering right over the park.  The weather soon cleared up, and we found ourselves sweating our way through Red Rock Canyon.  This canyon was my first glimpse of the crazy geological formations that Bryce is famous for and we enjoyed the luxury of a paved bike path for close to 10 miles. Aaaah.  All we had to do is relax, pedal and enjoy the scenery. 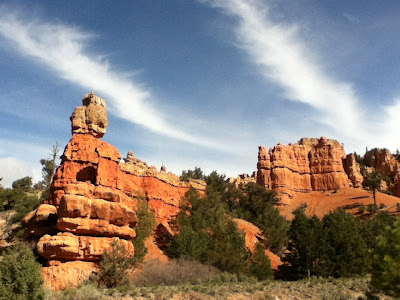 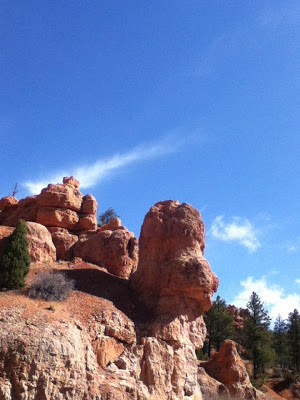 We also climbed back up to 8,000 feet again and then descended back down only to regain the elevation again.  By mid-afternoon we had rolled into the tiny town of Henrieville and the weather started to turn again.  We had already put in a lot of miles, but decided to pedal 34 miles further to the bigger town of Escalante.  The micro storms were still threatening and the wind started to pick up.  We put our heads down and kept grinding.  We were working hard, but the scenery was gorgeous and the highway was empty.  At some point, we realized we had been climbing for a long time and shortly after this realisation, we saw the road turn skyward and a sign which read 12% grade.  We grunted our way up to the summit and our first glimpse into the immense wilderness that is known as the Grand Staircase-Escalante National Monument.

At the summit, we were greeted by an amazing view and a massive storm system.  We didn't have much choice but to continue, but we could see that the road was heading right into a giant black abyss.  We put on all of our warm layers and started down the descent.  The storm hit within seconds.  It started as big huge rain drops and turned quickly into sheets of rain.  The rain was pummeling us and flooding across the road in big waves.  Yet again, we witnessed the desert in flood with water cascading off every rock and accumulating on the road. I was forced to get over my fear of descending with a loaded bike whilst doing battle with the elements. I rode like a crazed woman down that mountain, maxing out at a speed of 50MPH, while hammering the pedals in an effort to stay warm and get to Escalante as fast as possible.  I was grinning like a crazed woman, soaked to the bone and having the time of my life. We narrowly missed a hailstorm, but passed through an area with hail on the ground. There, we came across an unfortunate scene:  a rollover accident on the Road-turned-River.  The unfortunate driver was O.K and being well taken care of, so we continued towards town.  The sun came out just outside of Escalante, just in time to warm us up as we were starting to get very, very cold. 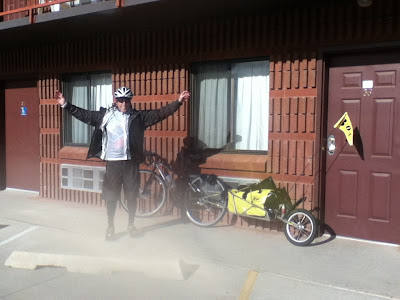 So far, our trip was dishing out the incredible scenery, with a side of weather mayhem.  It also appeared that our chosen route was popular with the motorcyclist crowd.  There appeared to be more motorcyclists than cars traveling this corner of Utah.  On this day, we also realised we were celebrating an anniversary of sorts!  A year ago, Keith was hit on his roadbike while cycling through Yosemite National Park. I've got to say his speedy and complete recovery has been nothing short of amazing.

Are you ever going to do a group moon shot of everyone on a trip? that would be funny.