It's Ski Season - Please Kindly Send Us Some Snow.

It's ski season. With the late arrival of winter and the snow that accompanies it, I've been slow to get out skiing this year. Here in Banff, we're still waiting for the snow to fly. I was excited just to be getting out for the first ski tour of the year and was stoked to wake up and see a perfect bluebird sky out the front window. Yeah!

For our first ski day of the season, we decided to go for a long walk on the skis to Sunshine Meadows. For our first foray into the backcountry, we just wanted to see how much snow is actually out there and what kind of shape the snow is in. Despite appearances of glorious meadows of white snow, the snow has got no depth to it. We are desperately in need of more snow. 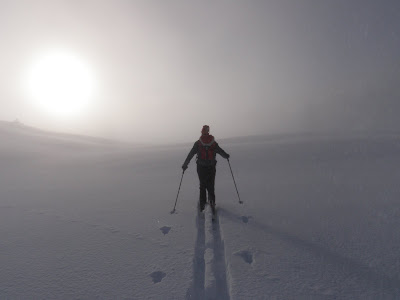 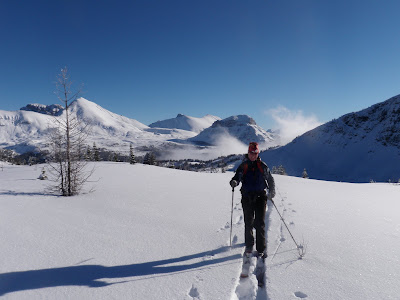 The early morning cloud left us to reveal a rather magnificent, perfect blue-sky day. It took a few hours to wake up those rusty ski touring muscles - but we ended up touring for about 5 hours with a short lunch break. I forgot that ski touring is hard work! I frequently find myself breathing a lot heavier and working harder than I would on any run. The other thing I noticed is that your body is constantly struggling to find it's centre of balance when you're making your way through deep, untracked snow. My back and core were getting worked. As well as my butt And my legs. Oh yeah and my shoulders. :) 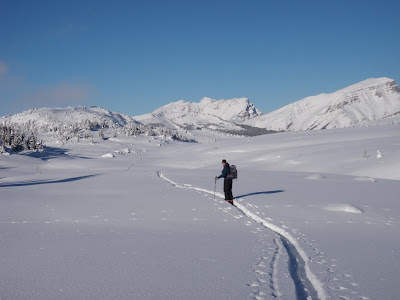 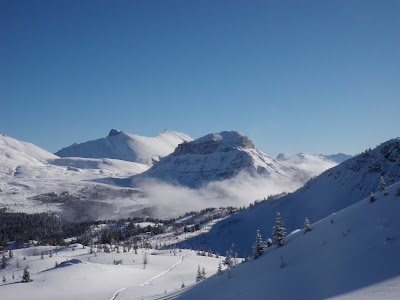 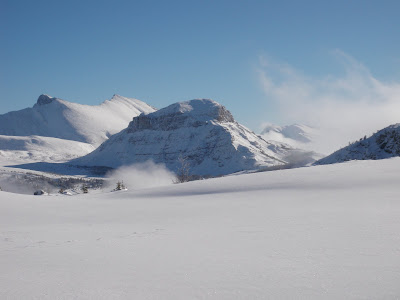 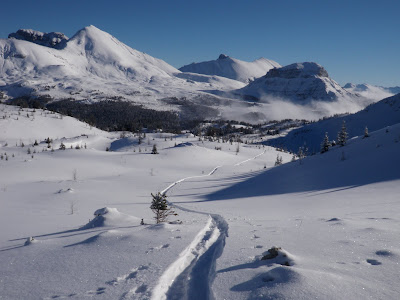 Either way, it was a beautiful day to be working out all of the creaks and we broke a trail all of the way to Howard Douglas Lake. The snowpack is shallow, there's no base and what snow is out there is full of layers, wind-blown and treacherous. What we discovered was that there really isn't enough snow out there for good turns, but there's certainly enough to go on a long, safe tour and enjoy some awesome scenery. Keith and I had a great day in the sun. 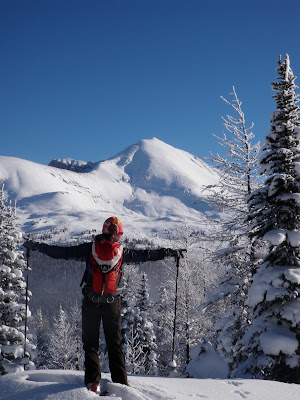 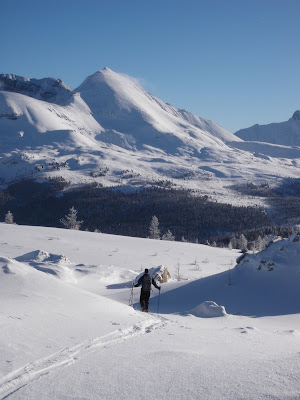 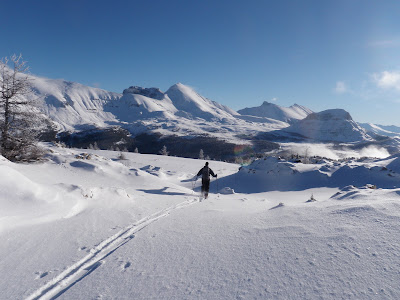 The next day I followed it up with a long run, shockingly - a road run. In the winter months, there's always lots of time spent on my feet on the trails, but a whole bunch of it is spent walking up hills and through snow. I'm always running on soft, uneven terrain. I thought it might be prudent to throw in the occasional road run, just to remind my body what it feels like to run consistantly. Here's the verdict: it hurts. Despite my fitness level and amount of time that I spend running on the trails - trail running is not road running. Fortunately, the scenery was awesome and I had myself a great run from Johnson Canyon to Banff. 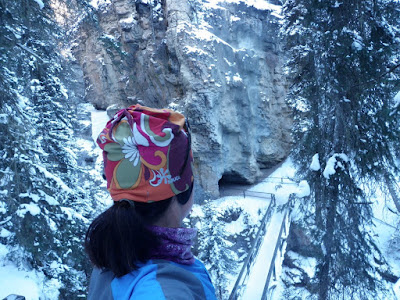 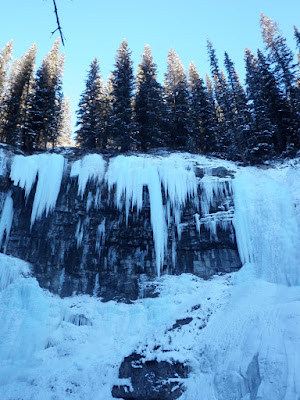 Keith dropped me off at Johnson Canyon and I ran the 6km round-trip up to the Upper Falls as a warm-up. Well, it was supposed to be a "warm-up" but instead I was frozen by the time I was done. Go figure. A trail run up a dark canyon to a beautiful frozen waterfall - cold? Ha! The 25km run in the sunshine warmed me up plenty and with literally no traffic on the Bow Valley Parkway, it was a pleasure cruise. Awesome. 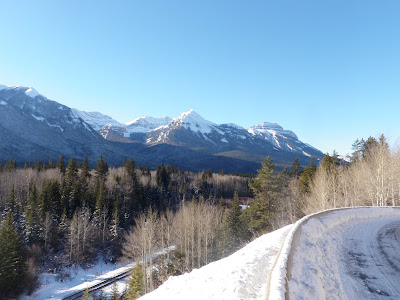 Views from the road - the Bow Valley Parkway, Highway 1A 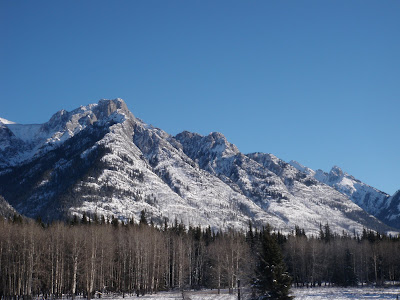 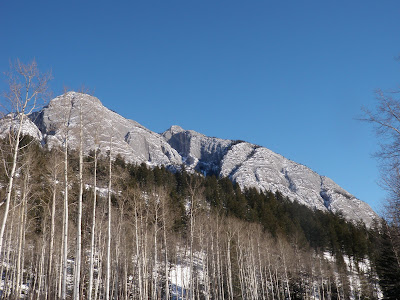 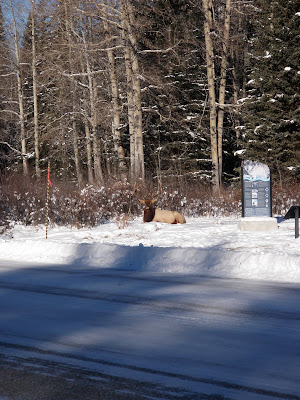 I had seen this massive bull elk, when Keith and I drove by earlier. Sure enough, he was still sitting in the exact same spot when I came running by a few hours later. I gave him lots of space. 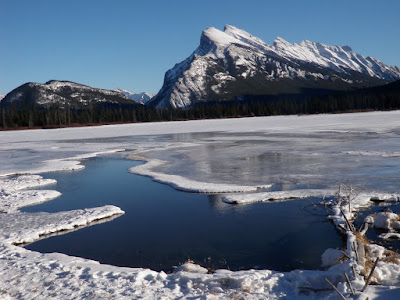 As always, the magnificent and well photographed Mount Rundle welcomed me home. I love this view any time of year, but even more in the winter months. As well, Keith welcomed me home - he ran out on the Vermillion Lakes Road to join me for my last few kilometres. It was an awesome "solar-powered" weekend. 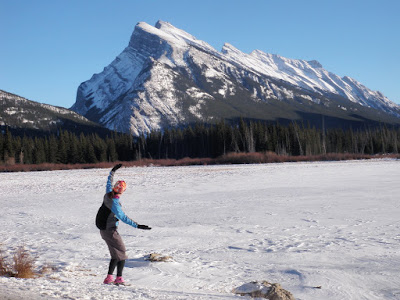 I think we may have your snow! hee hee.

I think road running is physically much easier but mentally tougher. I think ski touring is definitely more work than running. Pretty pics! We have great snow here!

Ladeeez, please send us your snow. I've heard in the Chamonix area there has been heaps of the white stuff and I also know that our neighbours to the South in Fernie B.C and Whitefish, Montana have been rather blessed this early in the season. Weirdness. Either way, you have it and we need it. Rrrrroar!

Hi from the non runner but scenery freak - SIMPLY BEAUTIFUL!!! Do hope your wish is granted soon.

What kind of skis do you use? Are they like a cross between downhill and cross country skis?

Thanks for the wintery views of Johnson Canyon. Enjoyed it this past summer when it was a tad bit warmer.

Alpine Touring skis - essentially a big heavy alpine rig with "skins" to put on and off. So you can march up mountains and ski down them confidently!!

Hi Leslie,
great snow, we have the same here and tomorrow we go for our first skiing in the mountains. next time when you are in Europe drop by..
merry xmas and a happy New Year from Germany (we live in Holzkirchen, just 30 km southeast of Munich and the snow is all over here..( say hi to your parents and Chris Christel