Max, the mountain man from Chamonix, knew what he was talking about. Turns out, he knew a whole lot about the area. As well as the glaciers, he pointed out a few major peaks, and of course the omnipresent Monte Bianco. A few hours later, we climbed our way out of the valley, around the shoulder of a nameless mountain and up to the behemoth glacier. Because it was a Sunday, there were lots of people hiking on the trail and we were enthusiastic greeted with with "Allez-allez!" "Bravi, Bravi!" and "Bravissima!" We were loving life and the scenery was everything I had been hoping for and more. Angela and I were sticking together, because an adventure of this magnitude is always better when shared with a friend. 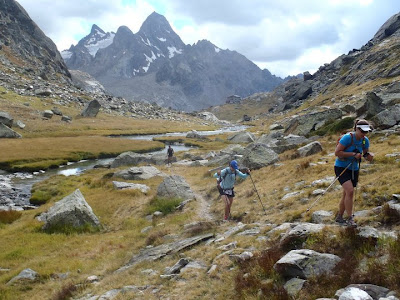 That's us making our way through a boulder field. We spent lots of time on the trail in the company of Michael Cartright, who is also good people. 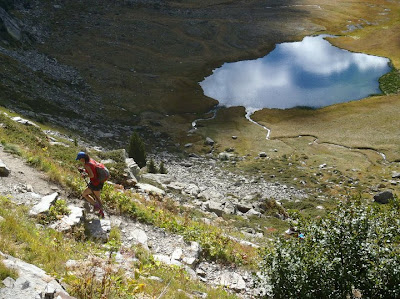 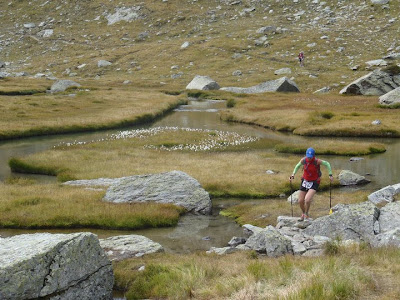 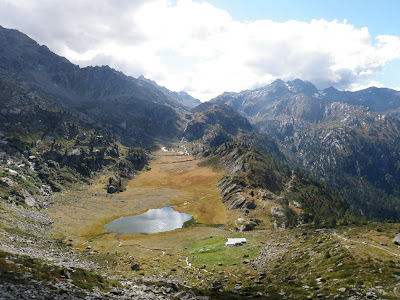 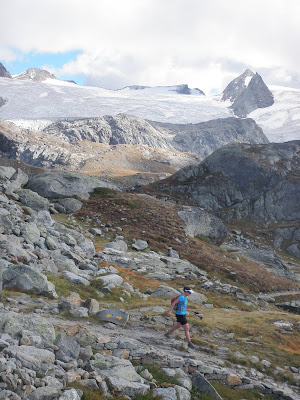 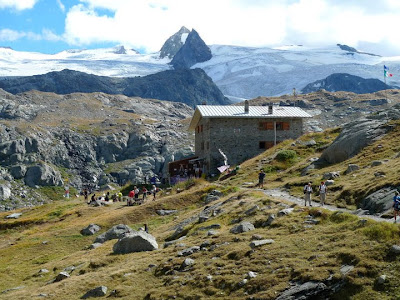 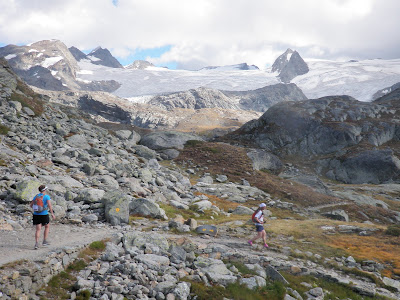 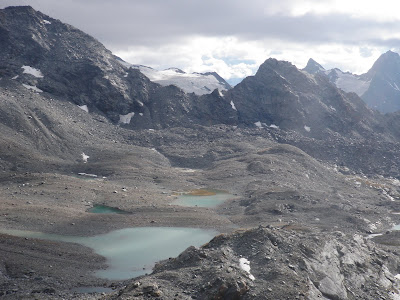 At the top of Passo Alto, we gaped at our stunning surroundings, did a little happy dance and took off downhill for another 800 meter descent. From there we tagged the Rifigio Promoud, ate more cheese and bread and started climbing again. The trail pointed skyward, as the last light of the day faded behind the mountain. 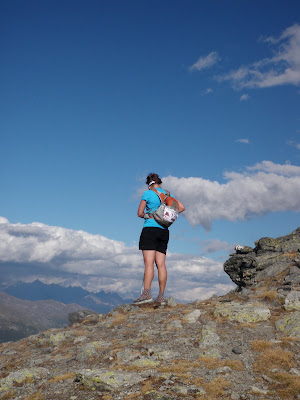 When we hit what we thought was the top, we were greeted with a steep scramble, some serious wind and plummeting temperatures. I dug out my puffy insulating jacket, my toque and my shell and pulled them all in as quick as possible. The scramble was a little bonkers, complete with ropes and ladders and we just kept moving, upward, onward, upward and onward. When we finally crested the last pass of the day at 7:30 in the evening, we were giddy, awestruck and blown away with what we had just completed. We were also thinking of the scope of the task at hand. I looked at Angela and giggled, "That was the hardest day I've had in the mountains, ever." We were 1 day and 3 passes in to our race and we had already climbed 3,200m or 10,500ft. 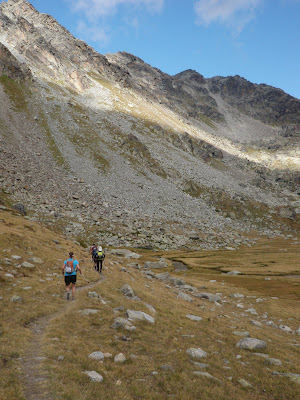 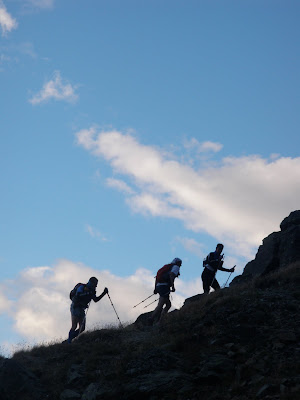 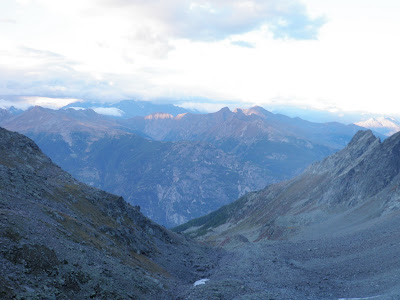 This was the view from the top, after that, we descended all the way down to the valley visible from this photo and back to civilization. We enjoyed another 20 minutes of daylight, before we had to dig out our headlamps. It took us over 3 hours to arrive at the lifebase in Valgrisenche, in the dark, tired, hungry, but happy. I commented that "If my race was over right now, I'd be O.K with that." I had already seen more stunning scenery than humanly possible, conquered 3 passes and felt like I had the adventure of a life time in a day.

At the life base, we got ourself a hot meal, a shower (side by side with 2 french men) and a bed. We organized our gear before trying to sleep and turned off the light at 12:00. Turns out there wasn't much sleeping to be done. With all of the racers being on different schedules, there was always someone coming or going. Doors slamming, zippers pulling, whispering and people making preparations before departing. Eventually, I rolled out of bed at 4:30 because there wasn't any sleep to be found. I had slept maybe an hour or two at best. Angela and I had some breakfast and headed out in the dark to embrace Day 2.
Posted by Leslie at 7:46 PM

Wow, this sleep junkie would have a hard time with that.
But the views, OMG, keep them coming!

I am so glad there is more to come. What an adventure!
I don't think I would be able to sleep either - too much excitement.

As always great photos of great adventures, keep them coiming.

One winter on the way to a ski comp my family and I got caught up in a huge traffic jam due to snow, snow, snow. In the Alps roads getting blocked is such a rare occurrence as they are so on the ball, but get stuck we did due to this snow fall. As a result we had to sleep in the Marie along with the entire traffic jam - there was not a lot of sleep to be found there either with all the different groups whispering, snoring and the worst culprit of all my dad setting off his alarm clock so that we didn't miss our race just in case the roads had been cleared. This alarm clock could wake the dead, I'm talking a proper old tick tock clock with bells on the top - oh the stares! - and so I can only imagine your experience was much the same!
Loving the story so far!