The Long and Short of It: A Tale of Two Runs

This past week, I enjoyed two runs. One, was a gift and the other was planned but they both turned out to be great runs. Both showed me that the hardest part of running is just getting out the door.

The first run, was short and spontaneous.
Thursday was a quint-essential Banff In All of Its Winter Glory kind of day. The fresh snow had fallen the day before (the Treadmill Debacle) and it was clear, crisp and startlingly perfect. Everywhere you looked, the world was sparkling. I unfortunately, spent my day at work gazing out the window. I dawdled home a little tired and hadn't given any thought to a run. I had a few big ones planned for Friday and Sunday, so I was going to take it easy. When I got home, the world was STILL sparkling outside and the sun was setting. It didn't take me long to have the revelation: JUST GO!! RUN!! JUST A SHORT ONE!! GO!! So I did. It would have been morally wrong to let this perfect day slide by and I almost did out of sheer laziness. Not ten minutes later, I found myself running on perfect packed snow climbing up the Tunnel Mountain trail, with a big grin on my face. As they day was ending, he trees were still sparkling, the temperature was lovely and the world was so perfect up there. It was so calm and quiet, except of course for the sound of my breathing. What a gift! 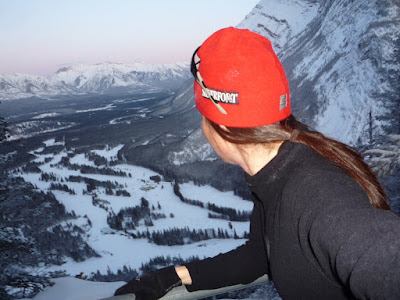 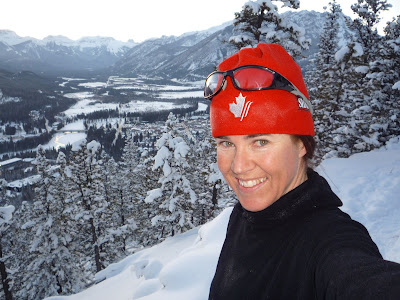 The second run was long and planned in advance.


I had to get my long run in on Sunday, but was lacking in motivation. So I called my buddy Mike. Long runs are so much better with a friend! We ran to the top of Sulpur and did a bonus sprint to the top of the weater station. The weather was perfect for running and the time flew by. After running to the bottom, I did a bonus loop by myself for a total running time of 5 hours. I love my long runs! And that's the Long and Short of It. 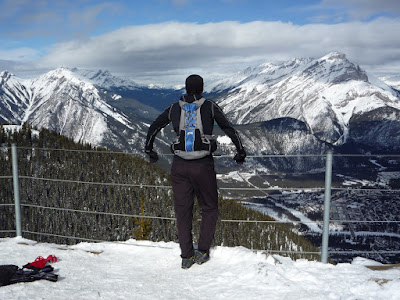 Just check out that view! 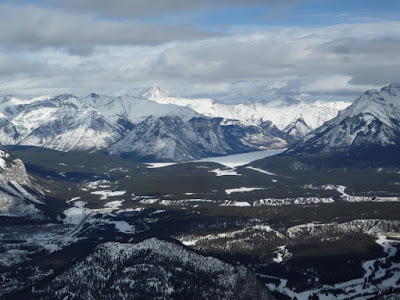 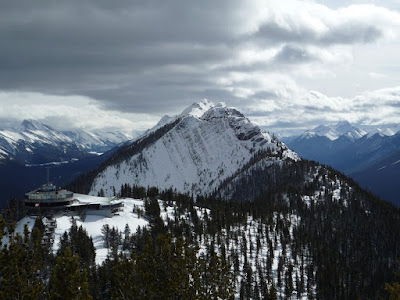 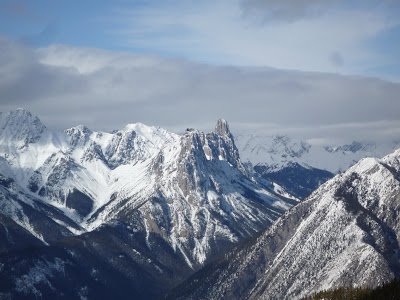 So are you getting all pumped up for the Diablo?? It is coming up quick.

Here i am sitting on my balcony enjoying the last bit of sun that is left and dreaming about skiing in Banff!!! Isn't that weird? ;-)

Hope all is well!

You are indeed very moral with your runs. Are you doing your long runs on roads? Or do you have loopage going on?

Leslie, I am going to have to kindly ask you to stop posting such amazing pics.
You have me dreaming of, and missing Banff everytime I check in on your updates!!
GR

Yep, I'm totally stoked. Any holiday is a good holiday and I can't wait to run on dry trails! Keith and I are also planning on spending a couple days with Meghan in Yosemite and a day in SF, just to go eat fish tacos....mmmmmm.

Hi Anna! Heck, even I dream about skiing in Banff and I live here!

Hiya Danni! I got the loopage going on, just to mix it up. Combo of trails and roads, I'm trying to finish every long run with 1 hour on the flats and work on speeding it up a bit. It's soooooo challenging this time of year trying to piece together my runs!
Can't wait to see you next weekend!

YO, gr.
And hear I was dreaming of a run with moss covered logs, ferns and sea air. Sigh. Last year I did Orcas and the year before I did the Chuckanut, so I haven't had my mid-winter dose of that moist ocean air that makes me run like a rockstar on 'schrooms.

If you want to come up, Keith and I have this thing that is so rare in Banff...it's called a..."guest room"!! It's so great to be an adult.