When Hell Freeezes Over (or stories from the cold...)

On Monday, the day we awoke to the temperature reading -42c, we decided to go to the pub after work. We were seeking comfort from the weather in the form of pizza and beer. After ordering some beers from our server, we were kept waiting and waiting and waiting for our bevvies. When the server finally returned, she said rather sheepishly: "The beer lines have frozen." What?!? Unbelievable. You can tell it is a cold day in Banff when the beer freezes over! 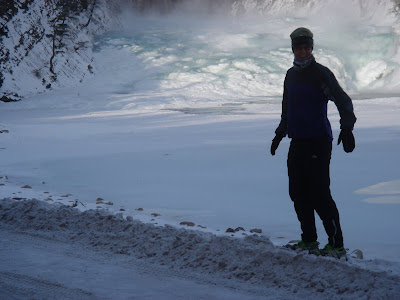 When Hell Freezes Over - The River

Also, did you know when it is this cold you have to be extra careful getting in and out of the hot tub? When you get out of the tub, normally you can just dash across your snow covered deck to get back into the house. When it is this cold, you have to be extra cautious! I was surprised the other day when I emerged from the tub and my feet immediately adhered to the ice I was standing on. Fortunately, before I became solidly attached I uprouted myself in a panic and continued to pick my feet up extra quickly to prevent furter attachment as I made the dash. As I was quite concerned with my feet freezing to the earth, I was further surprised when I reached for the patio door and my fingers stuck to the door handle. Hmmm. 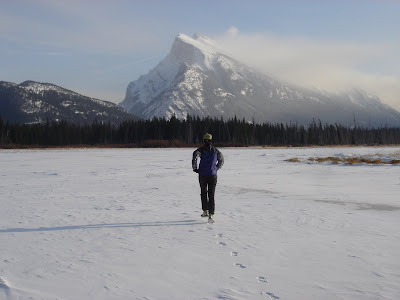 When Hell Freezes Over - The Lake

The cold weather has given me flashbacks of a memorable day 9 years ago, when Keith inadvertantly locked me outside while I was in the hot tub. The problem on that particular day was that I was naked and it was -30c. I spent about an hour marinating in the hot tub before I worked up the courage to do a naked dash across my front lawn, climb over a fence, balance and pry open a window while standing on said fence, followed by a less-than-impressive-slightly-painful-dismount. I had to hold the window open and dive through the window simultaneously. Naked. When I hit the hardwood floor in a heap, my dog came to the rescue with a non-stop licking bath. Evidently, girls marinated in hot tubs taste great!

Until this morning, I thought there would be no more cold weather surprises, especially after the beer freezing over. This morning, I went down to the laundry room to collect the laundry and realized-oops-I forgot to turn on the dryer. My towels had been sitting there all night and were still soaking wet. When I turned on the dryer, I was greeted by an orchestra of thumping and bumping even louder than the sound of running shoes in the dryer! I opened up the door and a towel fell out on my feet. And it hurt. My load of towels were frozen solid into a couple giant ice towel blobs.

So, after surviving a week of cold temperatures and a period of adjustment, I am finally getting used to the cold again. After a few days of hibernation, a lot of eating and almost losing my mind, I have run the past 3 days. The cold weather certainly has some merits. The Alpenglow has been amazing, I am sleeping and eating like a pre-pubescent boy and there is nobody on the trails! Now that I have wrapped my brain around such weather, I'm good with it. I think. Anyone want to go for a run?
Posted by Leslie at 9:05 AM

Please DO NOT let this post keep any of you from coming to visit! This is NOT normal...yes, we are embracing it, staying active, and having fun...but when any of you get here, I promise a wonderful warm world where everything is perfect...(Ya, right...)

Keep Warm wherever you are...

No, it's not the cold, per se, that would keep me away. But when the beer-lines freeze, well, sorry! NO CAN-DO!

Ahh, so inexperienced we are in Banff (shakes head). I, on the other hand, ensure to stock-up my booze cabinet in anticipation of these cold snaps...(that way I don't have to suffer through the local beer lines freezing over!).

This sounds like all the more reason to come out and visit!

I need to figure that one out somehow... How do you get there...on a sled?

I thought of you yesterday. What seemed difficult and challenging to us is normal to you!

I have a picture in my head...of a naked butt hanging out the window...now everyone will want to come visit you!

Michelle-
Thank you for ONLY visualizing my butt.

Jeffo-
Point taken! We need to think more like Phil.

Phil-
It's one of those stories that gets funnier over the years.

LOL x 100!!!! We recently found your blog and are loving reading about your adventures (and shivering from the cold!). The visuals from your post today are too funny! And we think we are cold when we go out when it's 0 degrees!!! -42 -- Yikes! We are in awe! :-)

I'm hoping the cold clears out before I head out that way on the 31st. And I'm impressed that you still attempt the frozen hot tub run after the naked incident AND after the frozen feet. I think I'd chicken out and bring out some shoes.

Perhaps the beer lines freezing is a sign you should be switching to something harder. I doubt the bourbon, rye or gin would freeze.

Hi Steve and Kathleen! and welcome! It looks like you are embracing winter with open arms. Whadya' do? You've got to work with what you have when it comes to training in winter!

Hiya K!
Hmmmm....maybe I should switch to something harder. Like Canadian whiskey! And then I'll have it in the hot tub. And if my feet melt and attach, I can use the booze to defrost them....
I'm a sucker for the hot tubby, even under duress.