Stormin' Norman - The Best Dog Ever 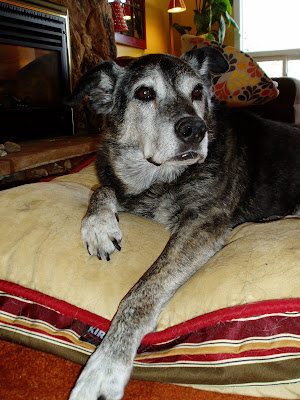 Norman the dog was a runner.

He was blessed with natural talent, agility and endurance. At one point in his life, he was the fastest dog in the Dog Park. He was a bullet! He would play fetch compulsively for hours and I would always surrender before he did. While he was a talented sprinter, he also was an endurance guy. He enjoyed those long dog days of hiking and biking. He insisted on staying close - when we were hiking, he had to keep you within eyeshot or he would wait on the trail. The only exception to this rule was if he saw a squirrel and then he became The Wild Dog.


Once, when we were mountain biking and I was bombing down a fire road at full speed, something caught my attention, out of the corner of my eye. It was Norman, running like a Cheetah that you see on the Discovery Channel in slow motion. You know, the back legs coming over the front legs, all limbs a blur. He passed me going about 60 kmh and I was worried he might explode in a pile of rolling fur and limbs and dust on the side of the trail, but he didn't. He beat me to the bottom instead.


People loved him so much that there would be arguments over who would get Norman when we went away. He was a lover. He loved to give the love and he loved to receive the love. He was fickle. He would love whomever was giving the love. He never saw the inside of a kennel, because he was so much fun to have around. He was always super mellow and laid-back at home and never ever demanded anything. If you took him for a walk, great! It you left him in the car, no problem. If you left him alone in the house, he would sleep. You could leave an open bag of kibble in the middle of the kitchen, beside the garbage and he wouldn't do a thing. He'd just relax. Chill. Sleep. Norman was a low maintenance guy. Sometimes we would lone him out. Our friend Brenda borrowed him for a backpacking trip once. She thought he would be good to snuggle with in the tent and he was. He kept her up all night growling at the night creatures in the bush, which is even scarier than sleeping by yourself in the bush. Afterall, he was a dog!


He was a licker. He was a kisser of small children. He liked to push them over and lick them. Every oriface if you'd let him. Parents didn't like this, but he thought it was great. He was always gentle with them. He made friends for us too. Ten years ago in the Dog Park, he picked up a couple of humans named Evan and Lorrie. We have kept them for friends ever since! He brought me and Keith even closer - afterall, our dog was The Best Dog in The World! He had a lot of love to give, this dog was a lover not a fighter. When people asked us what kind of dog he was - we would say he was A Brown Dog. You know, the one in your childhood dictionary with the drawing of the floppy eared happy dog that said, Dog? That was him.

He was amazing at age 11, 12, 13 - very active, very alive and very loving. People would ask me how old me puppy was! Thirteen, I would say. The last two years were different. It became very evident how old he had become. He went from being a brown dog, to being a grey dog. He was a new dog every week! He became the Deaf Dog. The Loud Dog. The Embarassed Dog whenever his body would fail him. The Needy Dog. He had never demanded anything his whole life and now he needed A Little Help Please. So we spooned him and gave him the love back. The one thing that never changed in his old age was that he was still The Lover. Affectionate until the end at age 15 and truly, The Best Dog in The World.


When I first met Norman, I was like....can't he sleep outside? There's fur everywhere!! Keith and Norman were a package deal, it didn't take long before I fell in love with both. I never knew I could love a dog so much, because I had never been a dog owner before. But that's what happened. After a few years he became "my dog" and we gave each other lots of love for lots of years. He was great company. Thanks Keith, for bringing Norman into my life!

Keith and I had Norman put to sleep yesterday and then we went for a run to make us feel a little bit better. I know it was a good decision, but I'm going to miss him so much! Long may you run Norman, Normie-Norm, Stormin' Norman, Nor-Man, Norm, My Norman Dog.....you were such a....Norman! 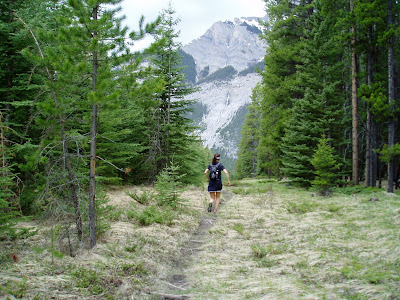 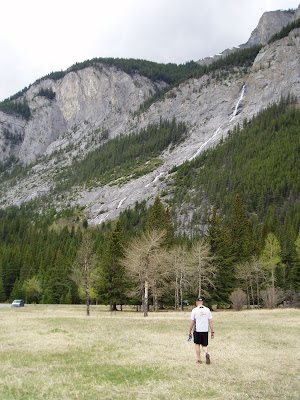 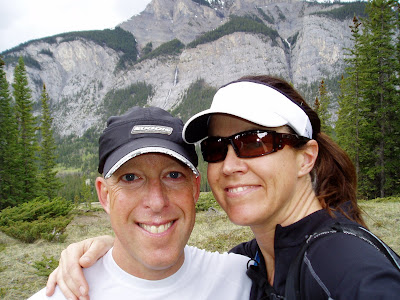 I'm so sorry for your loss. This post is a beautiful tribute to Norman - he was blessed to have you and Keith to share his life.

Old Norm. So sorry. I like what you wrote about him, Leslie. It's something I haven't faced yet.

Oh Norman! I will never forget the day I took him for a run, and I bailed on some ice right outside your house and all he wanted to do was lick me to death while I was down. He was such a wonderful pooch - poor Mags will be devastated that her boyfriend is gone.

Leslie and Keith
Really sorry to hear about Norman, good for you going for a run in his memory.
Polly

Thanks to all for your kind thoughts - and slobbery, wet kisses to you all.

People still remembered Norman 10 years post-Lake Louise. I once showed up with him in Lake Louise and walked him around the mall. He received more hugs and kisses from people I didn't even know...even so many years afterwards!

Hope all is well with you, good thoughts your way too....

Hey Leslie - sorry that I didn't know about Norman leaving you this past weekend or would have given you a warm furry hug in his memory. As another dog lover, I truly understand your loss and the countless cherished memories that come from sharing so much of your life with Norman. Your "last post" for Norman was a very special thing to share with us and a reminder of how much we learn and gain from our dogs... and we should all aspire to Norman's life of unconditional love.

Thanks Hugh. And slobbery wet kisses to you, too. I miss him, he was such a lover.
I will be borrowing the neighbours doggies and running them into shape! I will be the most sought after doggie sitter in Banff...

RIP Norman! As someone who has had to help many of my furry, four-footed friends over to the other side, I totally understand how you feel. Norm is running around the trails out there ... I'm sure that we'll all get to meet him someday...

Thanks CG, I really appreciate it.

Oh noes! This has made little tears pop up in the corners of my eyes for you. I'm so very sorry to read about Norman. Dogs are truly like family members, especially when we live active lives that include them so much. I'm glad that you had many years to enjoy the company of Norman and his owner, and I hope the memories of that are what you're able to remember after the harshness of these moments dulls a bit.

Thinking of you,
Meghan

I had many good thoughts of Norman today, as I was running on the shore of Emerald Lake.

I had taken him for walkies there the last two springs! Everything smells better in spring, especially if you are a dog.

Two years ago, when I was recovering from knee surgery we had a memorable walk around the lake. It was a long 5 km and we had to stop for lots of breaks. I thought it would be an eternity before I could run again! He gave me lots of slobbery wet kisses and made it better.

Finally, we were the same speed again. Both of us slow, but young at heart!

Great tribute to your dog Norman. It makes me wish I had met him.

Having lost our cat earlier in the year we know how running helped us with the loss.

Also without knowing you personally, I'm confident Norman had a great life; he was obviously greatly loved and because of your location and your great outdoor life he lived in what must surely be dog-heaven. I'm pretty sure he would say "thank you".

I feel your loss, and celebrate the life and love that was Norman