After enjoying a few weeks of spring-like weather, winter is back!! We all knew it was too good to be true as there are frequent snowfalls in April......but I for one, had been lulled into the false notion that maybe, just maybe, spring was around the corner. But yes, the great weather was just a tease. I should have known better! To think I was in Diablo a week ago and it was 90F!!

On Friday morning, I woke up all confused and sleepy. It was so dark in my bedroom and so quiet. I had been planning on doing a long run and was quite looking forward to it, so I got up and looked out the window and there it was: a foot of snow!!! Hmmm. That could make for some very challenging running! 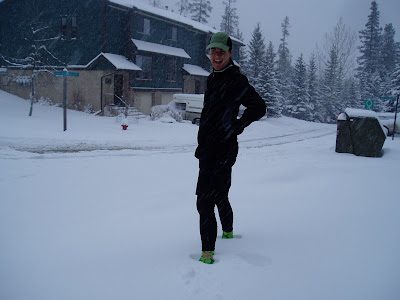 I decided to go out anyways, afterall, it was a beautiful snowy day. I just modified the program a wee bit. There was just too much snow to actually run on the trails, so I decided to do the Leslie Power Trudge for 4 hours, followed by a indoor bike ride with my hubby. A date and a movie and a bike ride - woohooo!

The Power March. The Power trudge. The Power hike! (Sometimes, I call it the death march.....) Whatever you want to call it - I went out trudging around in the snow on my favorite (snow covered) trails. It was awesome! Nice and quiet and very pretty. I managed to run a few bits and pieces, but mostly I was just walking really quick, there was just too much snow! 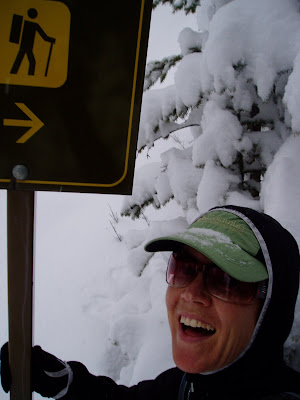 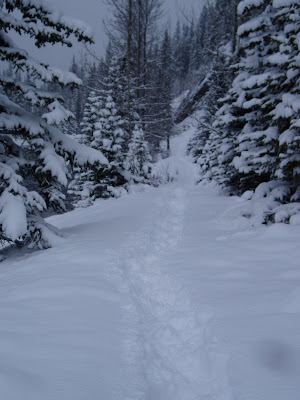 The Spray River Trail (it was shin-deep!!) 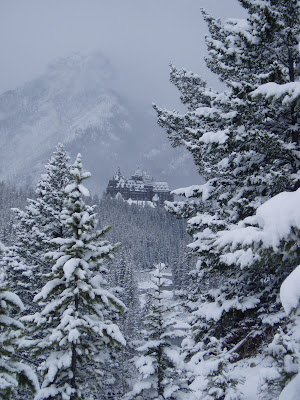 Little Castle in the Woods (The historic Banff Springs Hotel) 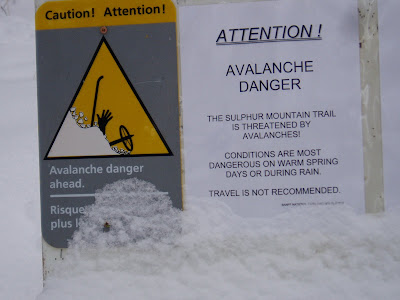 Wow! It's so beautiful! But I'm sure that you're sick of it. Back here in Diablo land it's now in the 50's/60's again with a stiff cold wind. My least favorite weather.

I love how you adjust to the conditions. What a great workout!

I find that flexibility is my friend in life in general - got to keep it flexible!

Hope your havin' a good weekend.

This weather it totally bonkers, hey??? Got to love spring in Alberta! I had to bust out my running snowshoes in order to get my little run in. Are you finally done with the long workouts before Miwok? When do you leave?

It snowed here today, but didn't stick. I'm ready for spring...so I can only imagine how you are!

I heart Holly! Yes, it is bonkers. As well as being snowy, it has now gotten frickin' cold!!

Yep - I get to scale down for the next 2 weeks and that was my last long effort. Now, I just got to stay healthy and relax.

Hey Michelle - yep, that's why I take these little mini-holidays.

You can't believe how therapeutic a day on the West Coast is in February! I go just to smell the sea air and see the moss and ferns. It doesn't even matter if it is raining sideways, it still feels good to me!

Dude, you only had fun because you were wearing your rose colored shades. And, how cute are they, by the way? Anyone in their right mind would have gone a little nutso over that much snow in late April. Our 5 inches pales in comparision, but I almost had a temper tantrum this morning, a food stomping style. I'm glad you made the best of what you had.

Oh, and I was laughing about your "Intangible Assets Advisor" job or whatever you said on your last set of comments. That's real funny!

Time to taper for Miwok you lucky girl! Enjoy the rest!

For clarification, I MEANT to say, "all foot stomping style." That probably makes a little bit more sense.

I grew up in a colder climate and miss snow. However, you guys are getting a LOT of it. Crazy!

Are you sure you miss the snow?? My trails are buried underneath it!! What cold snowy place are you from once upon a time??

You stole those sunglasses from Steve didn't you. He's gonna be mad when he finds out you know.

She was quick to see red in her rap-around rose colored glasses. She was a hot headed hottie from the great white north. Her smile like that of a brightly colored venemous snake,deadly. She ran into the snowy Mt. trails half crazed by the darkness, the snow around her ready to sweep all living things to the depths below. Hours later she stumbled home collapsing as she returned and whispered.... Rosebud

So much for my trashy novel writing career. Once again, you were handed a lemon and you made gatoraid! I love that picture of the Springs Hotel.

Hope the weather turns before August!

I love your cheesy novella!

The "weather" continue-eths.....
I have been having some quality time in the water office (hot tub)!!