Today, my friend Steve and I started the day off right - at a breakfast buffet! Mmmm-mmm. Coffee. O.J. Bacon. Omelette. Waffle. Fresh Pineapple. More bacon. Hash browns. Croissant. Now that's a breakfast. Have I mentioned how much I love food these days? It is all consuming. My co-workers are amazed. I'm like a 5 year old. Time to feed the kid before a melt down occurs. Constantly. Hungry. Must eat. Now.
Needless to say, we arrived at the trailhead 20 minutes later with VERY full bellies. Fortunately, we drank enough coffee to compensate for the lull our bodies should have been feeling trying to digest all of the grease we had just consumed. But no problemo - neither Steve or myself suffered any ill effects of our pig-out. Yeah! Digestive system of steel. I must say, I didn't need a lot of food for this 4 hour run, my big breakfast served me well. I just drank 2 litres of water and calories, had a little late run snack and was good for the duration!
The trail turned from snow and ice, into lovely rolling DRY singletrack very quickly. The sun was heating up the south facing shore of the lake and before we knew it, we hit the 8k mark. The conditions had improved quite a bit in the past week. Shortly after that, the trail turned snowy again so we headed down to the shoreline to take a look at the lake. We thought that the shore conditions might be better for running. 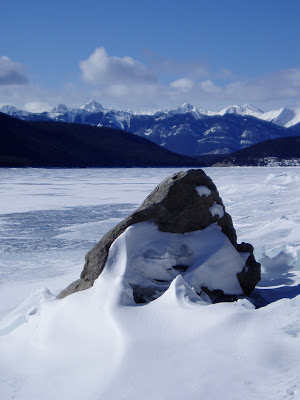 Shoreline - Lake Minnewanka
So we get down to the lake to have a look, but the shoreline slope is kind of tricky, so we end up further out on the ice. At first we were tentative and slightly nervous on the ice so we were staying close do the shoreline. Well. Next thing Steve is WAY out on the ice and he is jumping up and down and saying "Looks good!" That still wasn't terribly reassuring, but when I got out a bit further onto the lake you could actually see the ice depth. It was 3 feet deep!
3 feet = very safe!!
After that our run turned into the Ice run. The Ice Marathon. The Ice Capades. It was so much fun! I was a little giddy running down the middle of a giant frozen lake - in the sunshine and we were having so much fun we covered a fair amount of distance. We ended up at the Lake Minnewanka warden cabin for a quick snack and photo to proove we made it in March. 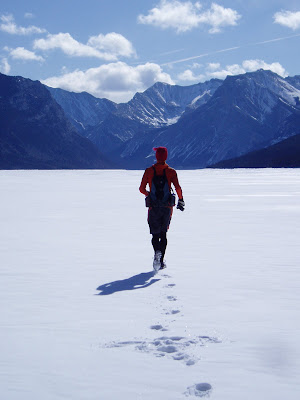 Let's go right down the middle!

All total - a four hour run in an incredible place. The perspective from the middle of the lake was very cool. It was cool to be looking at the familiar mountains from a view that is usually only accessible by boat! 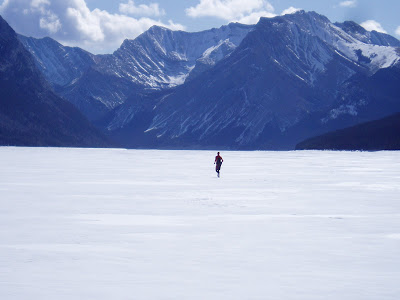 So much FUN!! This doesn't happen often that you get to enjoy such a unique perspective - usually the snow on the lake is too deep or it is not frozen....but seldom frozen, clear, flat and perfect with just enough snow to give you a little grip. O.K the icy bits were slippery, but we were having too much fun to let it bother us. 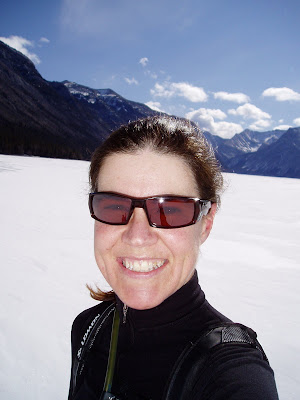 Get out the sunscreen - the glare off the snow and ice was bright!

Yiiiihaw! Another great day, but I do believe that ice is not going anywhere for a LONG time. Definately a unique opportunity for a run "on" the lake and a special surprise for us - neither of us had ever got to run down the middle of Lake Minnewanka before!
Posted by Leslie at 5:22 PM

I'd be a little wigged out too, till I saw 3 FEET of ice. Holy ice! Did you master an ice skating jump or two while you were out there also? Your buddy looks itty bitty in that one picture, talk about perspective!

Oh, and I was laughing about the food comment. One of my coworkers actually looks on in poorly hidden disgust at my caloric consumptions, I think. Oh well, speedy metabolisms, gotta feed the monster! :)

Isn't it great to be the bottom less pit of eating??

The lake run did make me feel itsy-bitsy. It was huuuuuuge!!
Steve has mastered the "super Steve slippery slide" it is his own personal namesake move/jump.

It was easier for him to do the super Steve slippery slide and glide than attempt to run without any traction aides. Fortunately, there were no wipeouts!

Hi Dave - it was super funtastic. The bacon made it even better!!