On Friday, I had to get up early and get my long run done so I could relax and enjoy a weekend of ski touring! The plan was to leave town at 2:00 and drive to Waterton National Park to enjoy a weekend somewhere different! Fortunately I made a date with Steven to get 'er done....and we had a great long run! Thanks, Steve! 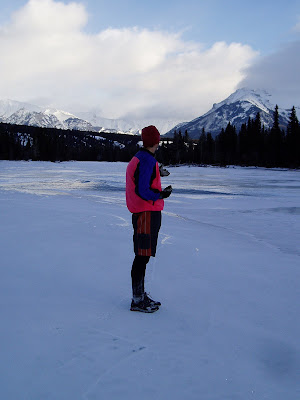 Not 5 minutes into the run we saw something cool: a coyote ran in front of us onto the frozen river where he sat down in the middle and fended off some ravens. We then noticed he had yummy breakfast in his mouth.....and when we ran by 2.5 hours later there was a giant patch of feathers and blood but no leftovers on the snow. We also had a little off road excitement when we navigated our way onto and across the river. Right in the middle of the river where a couple of ice heaves that looked like rolling waves, but the photos don't do it justice! 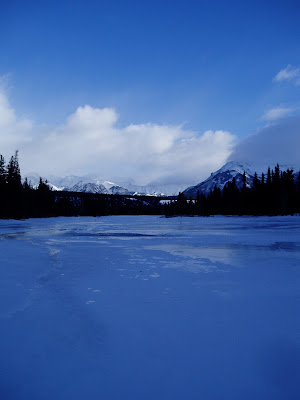 After that we pieced together a great run around town and passed one of my favorite trees up on Tunnel Mountain.....I don't think I was the first to ride this wild horsey....the saddle was well worn! A total of 3 hours+ with a litlle speedy bonus loop on Fenland Trail. 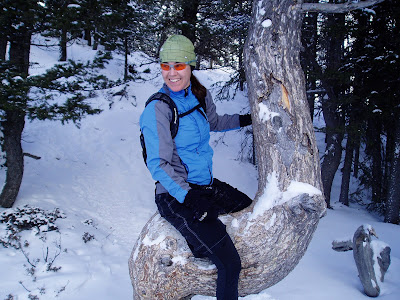 After the run I had to hurry to get my shit together, get some lunch and hit the road with Keith, Anna and Stew. Yay! Roadtrip!